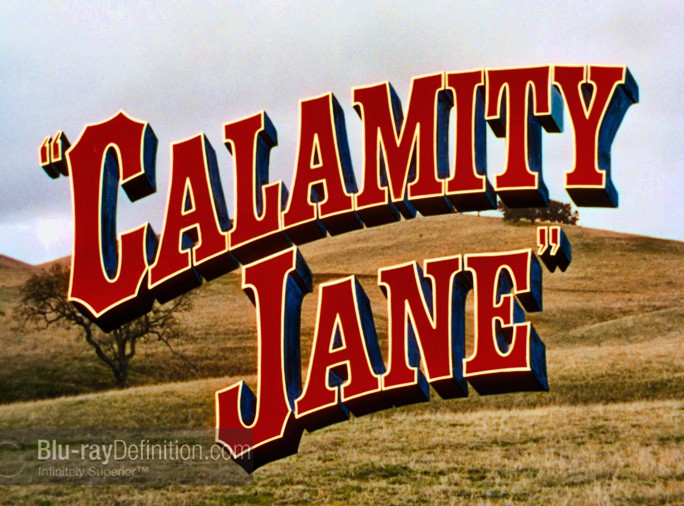 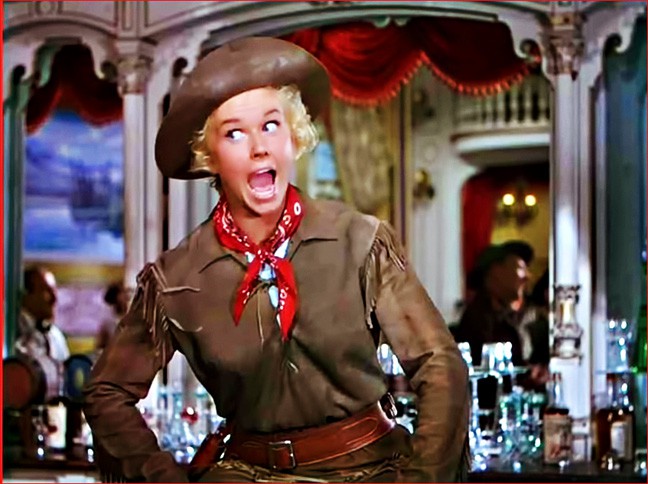 In 1953, over at 20th Century Fox, a big musical was in production. It was called Gentlemen Prefer Blondes starring Jane Russell and Marilyn Monroe, two of the leading glamour girls of the day. Across town at Warner Brothers, Doris Day was donned in buckskins, boots and a scout cap, perched atop a stagecoach, singing her head off and dancing up a volcanic storm in another important musical called Calamity Jane.

Both pictures would turn out hits and boost the leading ladies’ careers to new heights. Calamity Jane was fortunate in having one of the best singers in the world, who started her career as a dancer, playing the lead role. These two elements combined with her natural acting ability produced one of the legendary performances in musical film history. Doris Day literally snapped, crackled and popped as she portrayed the Wild West legend, Martha Jane Burke, a frontier markswoman who, according to some sources, worked briefly as a lady of the night during hard times. She was better known as Calamity Jane, crack shot and good friend and rival of Wild Bill Hickock, another frontier scout. This picture, of course, is fictionalised, with a splattering of truth thrown in for good measure. 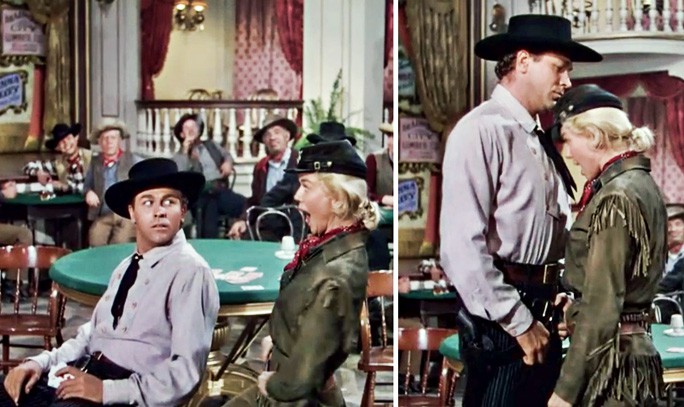 Howard Keel and Doris Day spar at The Golden Garter in Calamity Jane.

Day reported that she and Keel sang live while filming I Can Do Without You! It is a great number filled with physicality and one-upmanship. Calamity Jane was an excellent vehicle to launch Miss Day’s career into the stratosphere, for it catapulted her to new heights among the greatest of stars. She performed with such gusto, that one film critic said, ‘By picture’s end, she is within hailing distance of Ginger Rogers and Judy Garland’. But in the opinion of this reviewer, she not only caught up with them, she passed them both!

Calamity Jane centers around her effort to save Henry Miller’s saloon from ruin by bringing the much admired, beautiful Chicago singing star, Adelaide Adams, to perform in Deadwood’s premiere entertainment venue, The Golden Garter. Calamity promises the patrons of the Garter that she will personally bring Miss Adams back from Chicago to South Dakota. In Chicago, she sees Adelaide Adam’s show, from the back of the theatre, but later mistakes Miss Adams’ stage-struck maid, Katie Brown (Allyn McLerie), for the star. Katie, realising the mistake, seizes the opportunity to make her dreams come true by posing as Adelaide in the rustic no-man’s land territory of Deadwood, which has only a small cigarette picture of the singer to compare her with. After all, she did look similar to Miss Adams and she fooled Calamity!

After crossing dangerous terrain, with Indians in hot pursuit, the two arrive in Deadwood, unscathed, to tremendous fanfare. The men of Deadwood are delighted that Calamity has kept her word and brought the great Adelaide Adams to perform for them. Especially pleased are Lt Danny Gillmartin (Philip Carey) and (Wild) Bill Hickok (Howard Keel), who immediately take a liking to ‘Miss Adams’. To Katie’s surprise, there is someone in Deadwood who does recognise her; Francis Fryer (Dick Wesson), another entertainer from Chicago, who knows that Katie is Adelaide Adams’ maid. He does not, however, reveal this knowledge for fear of repercussions from Golden Garter owner Henry Miller (Paul Harvey). 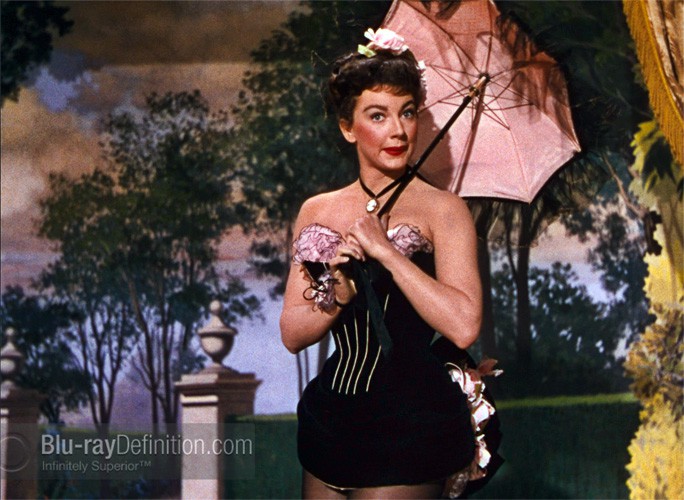 On her opening night, Katie is exceedingly nervous, and adding to her trepidation, Francis wishes her good luck by saying, ‘Give ’em all you’ve got, Katie’. The fact that he knows her real identity exacerbates her fear and she goes on stage and gives a disastrous performance. A disappointed audience boos her after she confesses to the crowd that she has deceived them and that she is not Adelaide Adams. A shocked Calamity comes to her rescue, imploring the angry crowd to give her a chance. Surprisingly, they agree to let her sing. With renewed confidence, Katie delivers a great show and now Deadwood has its own Adelaide Adams.

Katie and Calamity become close friends but when Lt Gillmartin becomes smitten with Katie, Calamity becomes jealous and orders Katie out of town. Katie, not wanting to come between Calamity and the man she loves, leaves Deadwood. Meanwhile, Calam is forced by Bill Hickock to face reality as he urges her to let Gillmartin go. Hickok, too, has had to face some facts about his feelings towards Katie and begins to see Calamity in a new, more romantic light. She also begins to see Bill in a different way too; as the man she has ‘secretly loved’ all along. When Calamity discovers that Katie has actually left Deadwood, she vows to bring her back. She catches up with the stagecoach to tell Katie the news that she is getting married, but that she would be Mrs. Hickock. As the film ends, a double wedding ensues with Katie marrying the lieutenant and Bill marrying the now more feminine, Calamity Jane. 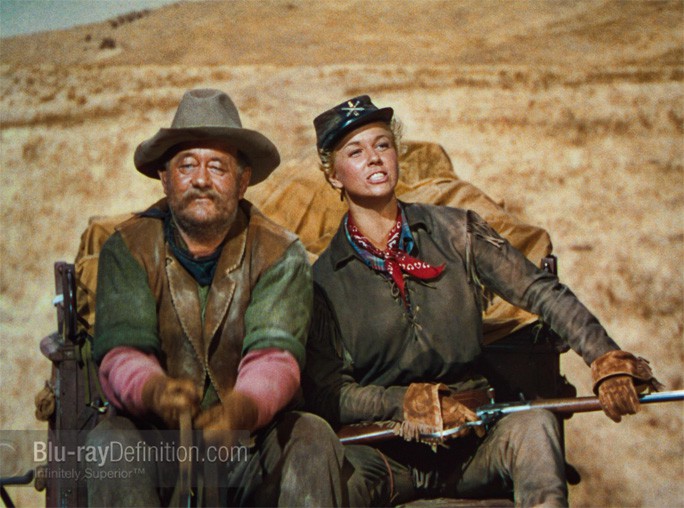 Doris Day on the Deadwood Stage in Calamity Jane.

This has got to be the best western musical ever to come out of Hollywood. From the opening number, The Deadwood Stage, Doris Day takes full command of the proceedings She sings, dances, rides horses, shoots and is vulnerable at the same time. Calamity is complex. She is feared by the men of Deadwood but respected and admired too. Miss Day is riveting in the part and gives the character everything she’s got, which is plenty. It is a robust, but tender, abrasive, but vulnerable performance, which makes its way into the hearts of millions. Howard Keel is just right as Hickock and plays his role with humour and charm. Doris is in superb voice and has most of the great numbers in the picture.

The most memorable song is, of course, Secret Love. A renewed, more glamorous Calamity sings the song to celebrate her new-found love for Bill Hickock. Sung while she rides a horse, she eventually stops by a babbling brook to pick a daffodil. The song went on to win the Academy Award as Best Song and the recording sold more than a million for Miss Day, earning her another gold record. 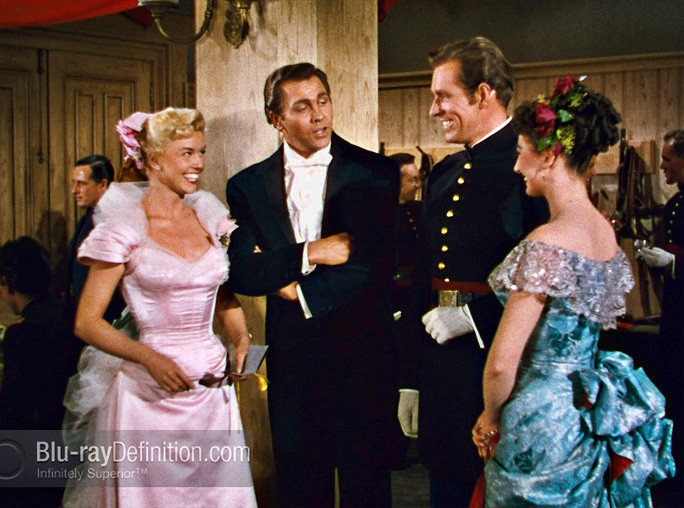 The rest of the cast is sterling. Philip Carey was suitably unsympathetic as Danny Gillmartin, Paul Harvey was fun as Henry Miller, as was Chubby Johnson (the Gabby Hayes of the film), as Rattlesnake. Gale Robbins was pretty and performed well (It’s Harry I’m Plannin’ to Marry) as Adelaide Adams. There were some very familiar faces in the crowd at the Golden Garter. Many of the extras were veteran western film performers we’ve seen in thousands of cowboys and Indians movies. Obviously, director, David Butler knew what he had here, a marvellous script, memorable score, a talented cast and two great stars to make this a film for the ages. 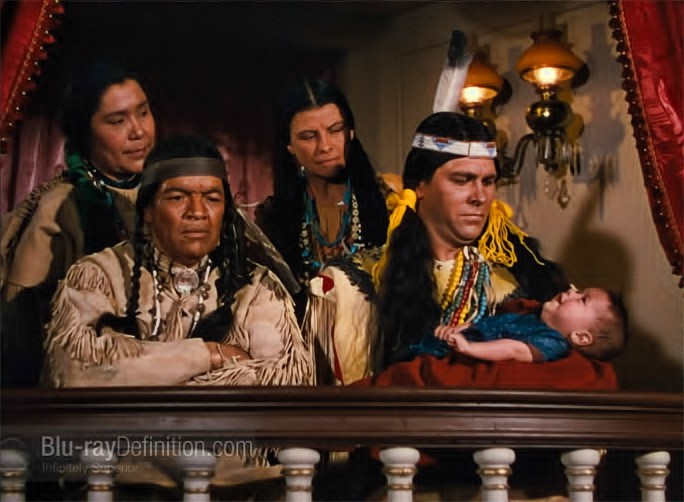 Howard Keel dressed as a squaw after losing a bet that Calamity wouldn’t persuade Adelaide Adams to come to Deadwood and sing at The Golden Garter.

I had a great working relationship with my co-star, Howard Keel.” – Doris Day

Doris Day had this to say about making Calamity Jane:

In 1953, I made one of my favorite musicals, Calamity Jane. I loved portraying Calamity Jane, who was a rambunctious, pistol-packing prairie girl (I lowered my voice and stuck out my chin a little). I can’t say that the physical high jinks of jumping on horses, bars, wagons, and belligerent men or doing pratfalls in muddy streams seemed to be particularly exhausting…

I had a great working relationship with my co-star, Howard Keel, and absolutely first-rate songs to sing (by Sammy Fain and Paul Webster), one of which, Secret Love, became my third million-plus recording and won that year’s Academy Award.” – Doris Day, Her Own Story 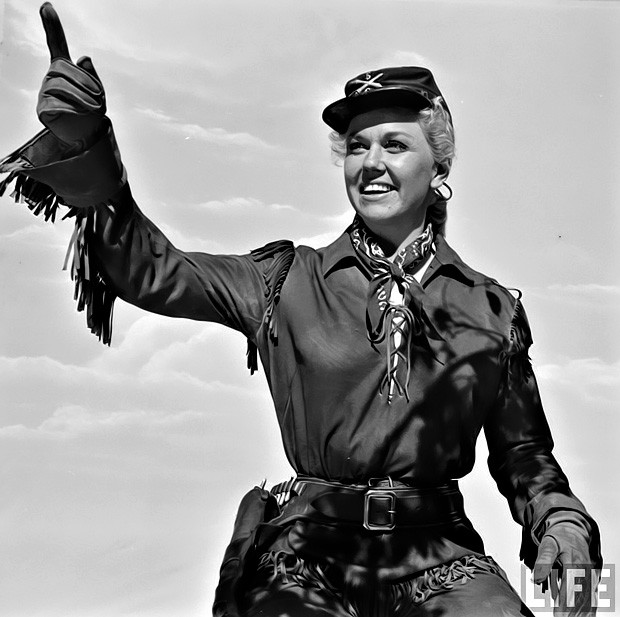 The opening sequence of this wonderful musical is pure pleasure, as Doris Day rides the Deadwood stage across the screen and into our hearts. This isn’t the real Wild West, of course, but Warner’s Technicolored riposte to MGM’s Annie Get Your Gun – the studio even poached the same leading man, handsome Howard Keel, excellent here as Wild Bill Hickock.

The specially commissioned score is a treat, but the strength of the movie is Day giving a marvellous musical comedy performance in her finest role, creating a warm, robust yet tender character; just marvel at her timing in Just Blew In from the Windy City, while Secret Love, recorded by Day in just one take, won the best song Oscar and is beautifully staged by choreographer Jack Donohue. A true delight that repays many viewings.” – BBC Radio Times

See also The Blonde at the Film: Calamity Jane