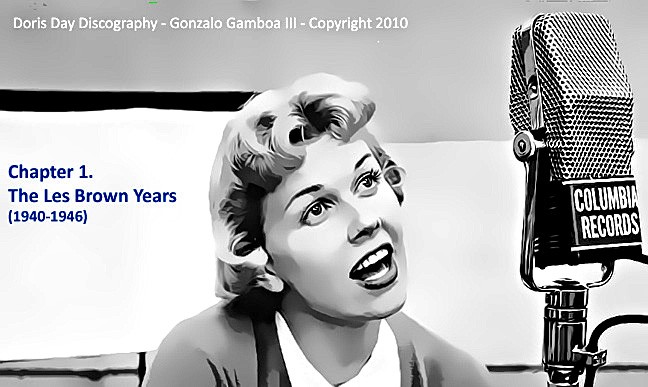 Doris Day joined Les Brown and band in August 1940. Three months later she cut her first commercial recording with Les Brown on the Okeh label (a subsidiary of Columbia Records). The first of these recordings were cut on 29 November 1940 and the last were cut on 8 April 1941. In all there were only nine records containing 15 songs. These were released as 10″ vinyl discs and were recorded to play at 78 revolutions per minute (rpm).

A. Singles on the Okeh Label

During this initial collaboration, Doris Day and the Les Brown band were featured on radio broadcasts from New York and Chicago. The engagements originated from the Glen Island casino in New Rochelle, New York on 25 October 1940, and from Mike Todd’s Theatre Cafe in Chicago on 19 March 1941. Details on these two engagements are covered in Chapter II – The Les Brown Years – Non-Commercial Recordings (1940-1946) of this discography.

There are also three known soundies featuring Doris Day with the Les Brown band. Soundies were the precursors to today’s videos and were produced between 1941 and 1946. These soundies were 3-minute 16mm sound films in black and white, which were rear projected unto the screen of a machine called a Panoram. The juke box type coin-operated machines were situated in diners, nightclubs, bars and other public places. The three known soundies of Les Brown’s band and Doris Day are as follows:

Sometime in mid-1941, Miss Day left the Les Brown band. During this time she got married, gave birth to her son, Terry Jorden, and was soon divorced. In 1942 she auditioned at WLW in Cincinnati, and became a staff vocalist. After hearing Miss Day on radio, Les Brown approached her, and to our good fortunes, she rejoined the Les Brown band in 1943. More details on this time period are covered in Chapter III- The Radio Years (1939-1953).

After rejoining Les Brown and his band, Doris Day recorded in the Spring of 1944 several songs on 16″ vinyl radio transcriptions for World Transcription Service. These transcriptions contained song tracks which were not available in other recorded formats. Some of these songs appear repeatedly on radio broadcasts billed as One Night Stands, Spotlight Bands or Magic Carpet. However, there are some gems that were available only through the 16″ transcriptions up until about 30 years later when Joyce, Sandy Hook, and Hindsight Records released Long Play (LP) albums containing some of these songs. Also in 2003 Varese Sarabande released a collection of 17 rare non-commercial tracks. Details on the Doris Day songs featured in the 16″ radio transcriptions are covered in Chapter II of this discography.

Doris Day returned to cutting commercial records (10″ singles) with Les Brown and his Band of Renown with the great hit Sentimental Journey, which was recorded on the Columbia Red Label on 20 November 1944, and released in January 1945. In all, Doris Day recorded 24 songs with Les Brown for Columbia on 15 red label 78 rpm 10″ discs, and one LP album (also in extended play (EP)) album.

Note: There is a little known treasure featuring Doris Day with Les Brown titled All Through The Day, which was recorded on 6 March 1946 and is contained the the Time Life STBB-11, Big Band (Les Brown) LP. This track was released in the Netherlands on Dutch-EMI Label MC3335.

There were other releases of Sentimental Journey and Tain’t Me on other Columbia LP’s and EP’s.