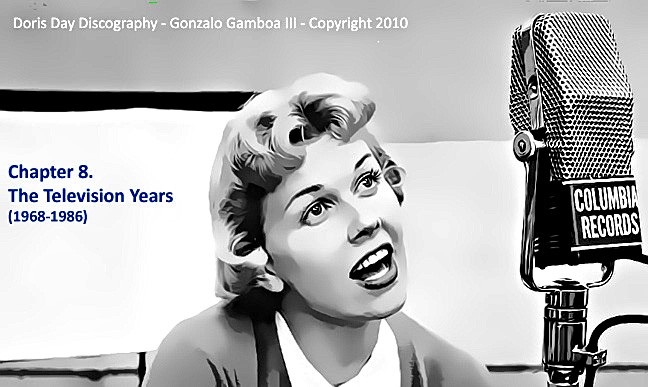 Doris Day made her first live television appearance on What’s My Line in 1954. There were other television appearances on such shows including Merv Griffin’s and The Tonight Show with Johnny Carson, but they were quite rare. She was prompted to sing many times, but always declined saying she was not prepared.  In 1976 Miss Day appeared on Mike Douglas’s show and he asked her to sing at the conclusion of the interview. Again she politely said no, but when Douglas began singing Sentimental Journey, the orchestra joined in and so did Doris Day. They sang the entire song together. Miss Day was terrific, prepared or unprepared.

After Miss Day’s contract with Columbia Records ended, she embarked on her television series The Doris Day Show, which ran from 1968 through mid-1973. She sang excerpts of many known songs, including a duet with Tony Bennett of I Left My Heart in San Francisco.

A. The Doris Day Show. The opening credits featured her signature song, Whatever Will Be, Will Be.

B. The Doris Mary Anne Kappelhoff Special (14 March 1971) featured Miss Day singing these songs, some with Perry Como as noted:
Secret Love/Feelin’Groovy/Obla Die, Obla Da
Hurry, It’s Lovely Up Here
You Must Have Been A beautiful Baby
Gypsy In My Soul
Them Was The Good Old Days
Both Sides Now
It’s Magic
Sentimental Journey
Medley w/ Como: Sweet Sixteen/Everybody Loves A Lover/
Quiet Nights of Quiet Stars/Summertime/If I Had My Life To Live Over/Let Me Call You Sweetheart

C. The John Denver Show (1 December 1974)
By The Light Of The Silv’ry Moon
On Moonlight Bay
I’ll See You In My Dreams

D. Doris Day Today (19 February 1975)
Anything Goes
Day By Day (from Godspell)
Exactly Like You (w/John Denver)
Follow Me (w/Denver)
Medley w/ Denver: Walkin’ In The Sunshine/You Are The Sunshine Of My Life/Sunshine, Lollipops And Roses/You Are My Sunshine/Sunshine On My Shoulders
Behind Closed Doors (w/Tim Conway)
Medley w/ Rich Little: Everybody Loves A Lover/Young At Heart/Teacher’s Pet/Love Me Or Leave Me/Secret Love/With A Song In My Heart/Whatever Will Be, Will Be
The Way We Were
Midnight At The Oasis (w/ Conway)

E. Doris Day’s Best Friends (1985-1986).  During the course of its 26 shows, Miss Day sang new songs recorded especially for the series. The songs were sung overlapping the different situations in the particular show. Besides the Best Friends theme song and My Buddy, others included: