Not forgetting Doris, of course! Looking pretty-in-pink here by Puck:

I continue to be amazed at the creative talent on this board. Great work, Puck, and the same accolade applies to Barbara, who never fails to impress. Keep them coming.

Mitzi Gaynor, aged 81 and looking and sounding good, talking about her career to TCM/The Hollywood Reporter (2013):

Love the colors in this new banner Puck.

Barbara wrote:Love the colors in this new banner Puck.

What a heavenly banner with striking colours without being overdone.
As we journey under our individual umbrella's,we should not forget we all share the same sky.Doris Day
Top

Thank you all - here's one from 'Lover Come Back' by Barbara:

Doris in high glam mode, my favorite look and period for her.

Nicely done and I would never that thought to go with an orange palette either.

What a delightful banner,Doris looks WOW!
As we journey under our individual umbrella's,we should not forget we all share the same sky.Doris Day
Top

Just wanted to say thanks to everyone who enjoyed this banner, And love the colors Bryan use around it. Hope he won't mind me saying, but Doris says, when you team up with Bryan it's always good! Lovely Barbara! We appreciate all the work and devotion to Doris that you, Bryan, Puck, Ania and others contribute to make these banners so special!

Barbara wrote:Just wanted to say thanks to everyone who enjoyed this banner, And love the colors Bryan use around it. Hope he won't mind me saying, but Doris says, when you team up with Bryan it's always good!

Thanks Barbara and all!

Did you know that it's the 60th Anniversary of Lucky Me this year? (It was made and released in 1954)

The film Doris didn't want to make following her huge success in Calamity Jane. And who can blame her, the plot is standard Hollywood B musical, despite it being the 'first musical in CinemaScope'. She'd probably had enough of Warner musicals by that stage and knew it couldn't match the success of Calamity Jane. However, her contract required her to make one more film for them and this is the one they wanted her to do.

And, as has been noted, she still gave it 100% and it's not a bad film - it's fun to watch and very amusing, I think. Mostly down to Doris being in it, along with great support from Robert Cummings, Phil Silvers, Nancy Walker, Eddie Foy, Jr and Martha Hyer.
Follow Remembering Doris Day: https://twitter.com/DayRemembering
Top 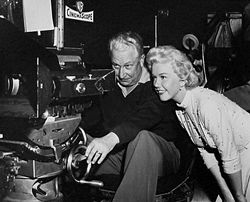 Doris and cinematographer Wilfred M. Cline on the film's set.

Notes from Wikipedia:
Doris began to suffer from panic attacks before filming Lucky Me, and kept putting the start of the project off, despite Warner Bros.' pushing her to begin. She was also unhappy with the script, writing in her 1976 autobiography, Her Own Story, "Robert Cummings, Phil Silvers, Nancy Walker, and Eddie Foy, Jr. were all talented, funny people, but I knew by now that no amount of talent can overcome an inferior script, especially if it is a comedy." She considered allowing the studio to suspend her rather than doing the film, but, on the advice of a friend, ended up fulfilling her contractual obligation. Nevertheless, the film was physically difficult for her due to the attacks.
The role played by Robert Cummings was originally intended for Gordon MacRae.
Angie Dickinson made her film debut in Lucky Me, having won the chance as the result of a television contest. She has an uncredited bit part in the party scene.
Follow Remembering Doris Day: https://twitter.com/DayRemembering
Top Love the banner from "Lucky Me", Wow, I didn't know it had been 60 years since this movie was made. I knew Doris didn't like the script from this movie, but even though she was suffering from panic attacks, and not liking the script from this movie, she still gave 110%. When she was in a scene, all eyes were focused on her. She has a way of making a so called bad movie turn out pretty good, all because of her dynamic personality.
This is just a little of what I am talking about. Watch her in action doing this cute little song. The Superstition Song is great fun!

This is a drawing for the dress she wore, as you've both shown above:

One of my favourite lines is at the party that Doris and Eddie Foy Jr gatecrash as a British Lord and Lady and the Martha Hyer character says to Doris:
"It must be exciting being a lady."
And Doris replies: "You should try it sometime..."

Thank you all, and a amazing banner Barbara and Bryan.
Top

Love the intro of the movie.Happy banner! Thanks Dorine - not too much interest in 'Lucky Me' right now, it seems.
Here's one I prepared earlier - not going in any particular direction with this:

Apart from revisiting an old favourite and getting ready for a week by the sea...
Follow Remembering Doris Day: https://twitter.com/DayRemembering
Top

puck wrote:Great banners Bryan, it's sad news about Lauren Bacall, she was a great actrice and a beautiful woman.

Hello dear Puck...I had to change my email..now it [email protected] THANK YOU
Top

Users browsing this forum: No registered users and 17 guests