Thank you all, appreciate your understanding. I was getting a racing-with-the clock feeling - self-imposed, naturally. I guess it's easy to 'waste time' doing things you enjoy rather than do the things you don't enjoy so much but need to do. I've made a little progress - even on the main Doris site, which I'll show you soon.
Meanwhile, I dipped into my banners folder from quite a few years ago and choose this one from many competing old banners. Anyone remember it? They were much smaller in those days as we had to worry about bandwidth a lot more!

I'm thinking I might start a banner topic next time. The Warner Years, for example, and people can comment and post image and film clips if you want to?
Follow Remembering Doris Day: https://twitter.com/DayRemembering
Top

I love this banner. It's fun and colorful like our Doris. Since I am fairly new, this is my first time seeing it. Thank you for bringing it back. Hope you're feeling less pressure. And as always thank you for this awesome forum. I love it!

Love the banner Bryan - you, Puck and Barbara are all so creative...keep them coming - they are always a surprise. Have a great weekend everyone.

During her seven-year contract at Warner Brothers, from 1948-1954, Doris Day made 17 films - roughly three a year. She became one of Hollywood's top stars as a result but began to feel her career at WB wasn't going anywhere.

Jack Warner played his part in her decision to leave WB by forcing her to make films she didn't want to make, such as Lucky Me. (Ironic that she would later find herself in the same situation with her new manager and husband Martin Melcher.)

When you think of The Warner Years, do you, like me, think of the musicals? Most were, but some were biopics, comedies and dramas.

I'd be interested to hear your thoughts and comments on Doris' years at Warner Brothers. And which are your top five films from that period? And why? (optional).

Starting at the top, I would have to pick her musicals, "Tea For Two" "Lullaby Of Broadway" "Calamity Jane". With Calamity being one on my favorites.
The non musicals I would go with Young At Heart, and you have to add On Moonlight Bay, and By The Light Of The Silvery Moon. Love going back in time with the family, and of course Gordon MacRae was a great pick as her costar. April In Paris would have been better if they had paired Doris with someone other than Ray Bolger, too old for her, and although he could dance, was just goofy looking to be a romantic interest.
And I think Doris surprised everyone, and maybe even herself, with how well she could act, even in her very first movie "Romance On The High Seas"
Yes! she was born for the movies, and her never to be forgotten personality that lit up the screen..
Will close with adding a photo from one of my favorites.
Barbara Barbara, I liked what you said and the image of Doris as Calam!

Ania - thank you also. Just wondered which are your favourite five films from DD's time at Warners? Have you seen them all? I haven't see Starlift but I have seen all the others - but can't remember a couple, The West Point Story and The Winning Team.

My favourite Doris Day films from the Warner years are:
1. Romance On The High Seas
2. Storm Warning
3.On Moonlight Bay
4. By The Light of The Silvery Moon
5. Calamity Jane

Doris makes all her films a pleasure to watch. The above films hold dear memories of my family and love of going to the movies.
Johnny
Top

Interesting that you selected Storm Warning as your second choice from that period, Johnny. It's not your typical Doris Day film, what made you choose that? Otherwise three of your choices are the same as mine.

I love them all Bryan

❤ If I had to choose five favorite movies is going in that order:
1-Calamity Jane
2-Romance On The High Seas
3-It's a Great Feeling
4-Tea for Two
5-Young Man with a Horn

You are satisfied with my speech Brayan?

Yes! - and good choice, Ania. I think most people will probably put Calamity Jane as their number 1.

Thank you for these beautiful banners. I love Romance on the High Seas since this is where Doris got the start to her very long and successful career. Then Calamity Jane, Storm Warning, Young Man With a Horn and last but not least, Tea For Two.

And Barbara I love the picture of Doris as Calamity Jane. Stunning!

My top 2 of Doris's WB films, in order, are "I'll See You in My Dreams" and "Romance on the High Seas." I love everything about ISYIMD, and ROTHS is so high on my list because of her spectacular movie debut.
The next 3, in no particular order, are "Tea for Two," "Calamity Jane" and "Young at Heart."
Top

Thanks Jas, Tybear and Judy - comments appreciated! I'm swapping the banner around as I did two at the time. The image came from Puck - see full image below.

I think Doris outgrew WB. We've imagined what her films would have been like had she gone to MGM: lush, in CinemaScope with all the top musical talent. She'd have danced with Fred Astaire rather than Ray Bolger! 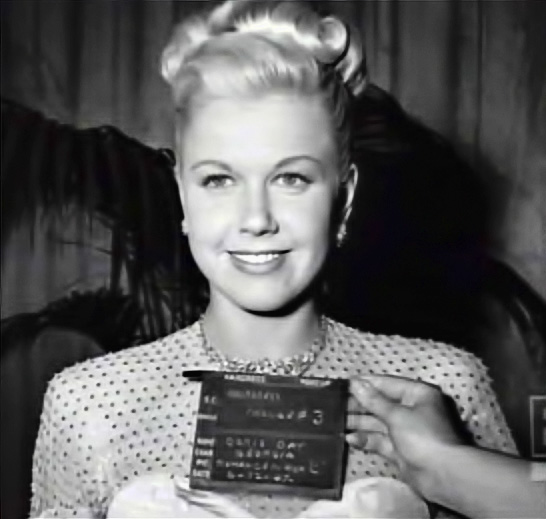 Here's my film choice:
1. Calamity Jane - Whip Crack Away!
It's her best musical at WB and one of the best musicals of its time, a great score with an Academy Award winning song - Secret Love.
2. On Moonlight Bay.
Introducing Doris the tomboy who could fix a car and didn't look comfortable in a dress! Plus I loved the 'America at the beginning of the 20th Century' setting
3. Lucky Me
It's daft and funny. The Superstitious Song sets the tone. I know Doris didn't want to do it but I'm glad she did. Phil Silvers, Nancy Walker, etc were great.
4. I'll See You in My Dreams
Martin Scorsese mentions this as a film that influenced him as a director when he was starting out.
5. Romance on the High Seas
Released as It's Magic in the UK. Mostly because it was her first film.

Can anyone guess which WB film she might have been making when this photo was taken?
Follow Remembering Doris Day: https://twitter.com/DayRemembering
Top

Going by the hairstyle looks like it is from "Lucky Me" era.
Top

Yes Barbara, could be, or possibly around April in Paris, or, just before either By the Light of the Silvery Moon, or, Calamity.
Top

So suggestions are on the right track. (I don't know personally, I was just wondering.)
Follow Remembering Doris Day: https://twitter.com/DayRemembering
Top

Bryan, I chose Storm Warning as one of my favourites because it left an indelible impression on me when I first saw it in the 1990's. I was so surprised that a film about the Klan and it's hatred was made in the 1950's. Doris was so likeable in this good thriller in contrast to her ruthless husband.

I also liked the sisterly relationship between Ginger Rogers and Doris. It is believable. The fact that Doris' innocent character dies in the film gives more power to the story.

I thought at the time, that it would have been great for Doris if more dramatic roles were offered to her. Fortunately Love Me or Leave Me and The Man Who Knew Too Much gave Doris a chance to shine in drama. These films are amongst her best.
Johnny
Top

Yes Storm Warning was hard hitting and should not be forgotten. Doris was appealing as the innocent wife of a Klansman and would still stand by him. Interesting. Interesting cast too, Ronald Reagan and Ginger Rogers,
Top