I think I prefer this one:

Yes, beautiful banner Bryan,from " Love Me Or Leave Me". One of finest performances.
Top

Bryan, i love this beautiful photo of Doris from the film LMOLM. This is definitely one of her best dramatic roles. Doris is such a veratile actress with the ability to do comedy, drama and suspense.

Thank you so much,
Tybear
Top

Thanks, Tybear! I heard on the news that today is traditionally the most depressing day of the year - not sure if it's just the UK.

So I thought I'd try to counteract it:

Doris' blouse looks pink in the banner but I think it is white. The blue in the background is my all-time favourite colour. From her earrings, to her hair and smile there is a wonderful all-over sparkle in this banner. Just warm and beautiful.

This Doris banner has made this nine degrees below zero Toronto winter day a lovely day in every way.

O Jesus what a wonderful banner and the fantastic blue color, simply amazing. And Doris looks phenomenal here♥ But she is beautiful♥
✬ღ♥ღ ღ♥ღ✬
Ps: Blue is my favorite color

Well, I'm really glad you all like it - thanks!

Bryan, this is one of the prettiest pictures of Doris i have seen. She is absolutely gorgeous. I love the blue background that brings out her amazing blue eyes and the pink blouse is so beautiful with her eyes and the background. Doris is a beautiful person inside and out.

Thank you so much!
Top

Yes indeed, a lovely day, an amazing creation, wonderful colors, you did it again, thank you !!!!!
Top

Thanks a lot, puck!

Change of mood - the great 'Love Me or leave Me': 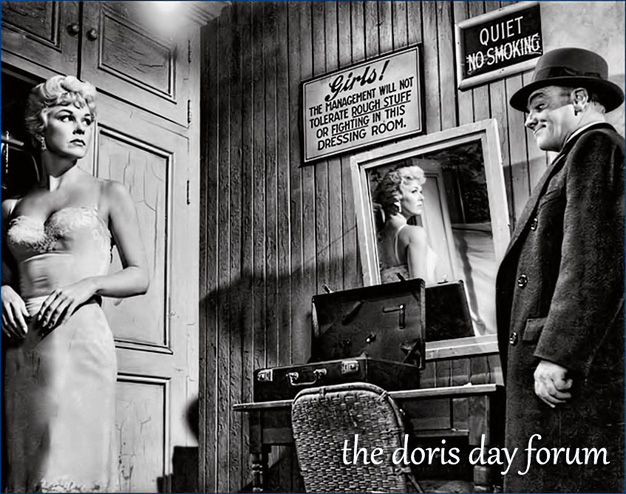 I saw this in a cinema in London, in 2000, I think, arranged by Stephen Munns from Discovering Doris. It was shown on a huge screen in CinemaScope and it was amazing visually - you could see furniture details and all kind of things you can't see on a small screen. It was almost overwhelming.

Have tried to bring out the details in the image above.
Follow Remembering Doris Day: https://twitter.com/DayRemembering
Top

James Cagney said: “In one of the key scenes in Love Me or Leave Me, we have a slam-bang argument that culminates with me slapping Doris. We rehearsed the scene a couple of times for the camera, but each time I only feigned slapping her, stopping my hand just short of her face. That’s a common movie technique, with the sound of the slap dubbed in later.

But when we were playing the scene, and I felt it was going just right, I didn’t pull my slap but I really whacked Doris across the cheek. I didn’t want to fake anything about that scene. She was stunned, more surprised than hurt, although the slap was sharp enough to give her face a sting – she looked at me with a stricken look on her face and tears welled in her eyes and that surprise was 100% genuine. And so is Doris.”

(I know it's hard to watch Doris being slapped repeatedly! )

Love the LMOLM banner- Doris looks fabulous in this pic.

Calamity Jane;
The man who knew too much;
Pillow Talk; and,
Pajama Game.
Top

Thank you Bryan for this mesmerizing shot from Love Me Or Leave Me. It is a captivating and a powerful image in black and white. You are so right about the details that can be seen on the large screen that enhance the film. There is nothing that compares to the wonderful experience of sitting in a large dark theater watching a great film on the large silver screen. The memories stay with you for a lifetime.

Every month Cineplex Entertainment Canada brings back a classic or popular film from the past. This month it is Butch Cassidy and The Sundance Kid with Paul Newman and Robert Redford.

I am inspired by your banner to email Cineplex Entertainment and recommend that Love Me Or Leave Me be brought back for a special screening to theaters this year.

Customer feedback is important to theaters these days,
Johnny
Top

I saw Pillow Talk at the same time and while it was great fun to watch on a big screen with an appreciative audience (all Doris Day fans for a special double bill) it didn't have the same visual impact as LMOLM. Not sure why - maybe it was the MGM Cinemascope lens and the general high-production values that they followed for big musicals and dramas. Definitely a memorable experience!
Follow Remembering Doris Day: https://twitter.com/DayRemembering
Top

This banner is fantastic and fantastic film, and wonderful in this film is the music. Doris was brilliant here♥

Calamity Jane;
The man who knew too much;
Pillow Talk; and,
Pajama Game.

Unfortunately, on the big screen I have not seen any movies with Doris

I can only watch on television, on a laptop, or a DVD, but it's not the same...

The Pajama Game is also great to see on the big screen. It was at a cinema in London that shows classic films some years ago so I dragged a friend along, who liked it but not as much as me!

From Barbara - Romance on the High Seas:

Thanks, Ania! You're always so generous with your praise - I like that! And always so positive - it reminds me of someone - just trying to remember who... - oh, yes, you're just like Doris Day!

I like Barbara's image, it captures the charisma that Doris had from the beginning and made her a success and a huge box office star. The fact that she wasn't overambitious and would have preferred a 'normal' life made her more of a natural. She was just being herself in a role, as a job.She didn't want to be the next Betty Hutton and that kept her feet on the ground. I think she was mostly concerned with supporting Tery and Alma at the time and that was her main motivation.

Thank you Barbara and Bryan for this interesting and thoughtful banner of Doris. Although the dress and jewellery look dated, Doris looks fresh and youthful.

She appears to have grown younger in her films as the years have went on. Doris will always stay young in our hearts.
Johnny
Top
Locked
1275 posts