I LOVE this banner Bryan in honor of Doris's birthday! It is so hard for me to fathom that she will be 92 and still helping animals everywhere. Also, thank you for your kind words. I would never make anyone feel bad for their beliefs because that is each individuals right to believe and worship in his or her own way. My intent was to encourage and not offend. You are always so gracious and accepting of other people and their opinions. Thank you so much for your gift of listening and your positive feedback.

The Doris Day Forum Rule - Treat others as you would like to be treated seems to be cornerstone of kindness.

Thank you both. I think empathy is something you have to learn - usually after some hard knocks that help you to realise that life isn't all about you - in fact it's mostly not about you at all!

Whatever I've learned I can still be very very mischievous! My friends often laugh at what they see as me being too outspoken, but I never do it maliciously or to put someone down, more for fun. (An example: I was out with friends, including a married couple whose student daughter came along, The mother asked me "Who do you think 'L' looks like, me or (my husband)?" "You," I said. The husband looked and me and asked "Why?" I said, "Because she hasn't got a moustache for one thing". (He did.) Everyone laughed including the daughter. The husband said to her, "See, I told you what he was like!"

It's more difficult to be like that (spontaneous) online/here as you are just looking at words and you don't know what the mood or feeling behind them is so you could offend someone easily with a jokey remark. But I think it's amazing that we've created a place where we can largely be ourselves, accept others and be accepted ourselves.

Of course, Doris is the glue that holds us together and that makes it a lot easier. I'm sure we are influenced by her attitudes and personality - it's better to be positive than negative, pick yourself up, dust yourself down and start all over again, etc. Even whatever will be will be - sometimes life just happens and you can't do anything about it. Except try to enjoy what you can and help others along the way to do the same, However imperfectly.
Follow Remembering Doris Day: https://twitter.com/DayRemembering
Top

Sweet image of Doris from Puck:

Oh my...that banner is stunning- that has always [well since 1985] been one of my fav images of Doris - wonderful job Puck- it is superb and around this time Doris just glowed [re-emerging into the spotlight for her TV show].

Re- the forum- yes, it is a wonderful place to pop into and forget any worries or woes and just concentrate on a fabulous tall blonde from Cincinatti - whose talents will never be surpassed and whose longevity is just thrilling [to me] - no one apart from very few [including Elizabeth Taylor] kept this media and fan interest going well past their film years. That kind of longevity is usually reserved for the tragedies and early deaths, e.g. Marilyn, Elvis, James Dean etc.

I've said it before but I will say it again - Doris Day really helps me to live my life and live it happily, to be grateful, to be kind if possible and forgiving -[or at least not cruel]- to appreciate, and to treat others how you would like to be treated- and [this has taken practice] to stay silent rather than criticise - in other words I really try to only comment when I have something good, nice, or at least constructive to say.

Doris Day is something else! To me she signifies everything that is great about America - I think she has done more than any other World figure to signify the true goodness and greatness of America.
Top

Jas,
Yes, Doris inspires the best in everyone.
You have described Doris' character and qualities perfectly.
Johnny
Top

Did we mention her sense of fun?

I think that's what attracted me to her in the first place - despite all the other obvious talents.

Not long to go now!

Another beautiful banner. This is doris natural around move over darling time. Why oh why didn't they use her own great hair in the film?

Bryan -re ain't we got fun - I often used to put that on volume up high and cradle and dance around my living room with my amazing tom cat Fon-Fon who loved dancing.
Top

Bryan - re ain't we got fun - I often used to put that on volume up high and cradle and dance around my living room with my amazing tom cat Fon-Fon who loved dancing.

Would love to have seen a video of that, Jas!

It is a great day brightener to start April 2016.

Thanks Johnny - looking at it, there's a kind of ingrained optimism in her expression - you could even imagine she was looking into the future. Which, all things considered, didn't turn out so bad for her.
Follow Remembering Doris Day: https://twitter.com/DayRemembering
Top

Great banner again, love this photo of Doris a lot. "Looking in the future..." I like that but it's always: "Que sera, sera, whatever will be... will be!"

Looking out for SunDAY!

Here's one I think is appropriate at this time - thanks to the Carmel Magazine (and the original photographer):

One of my favourite pictures of Doris. It is a wonderful birthday banner for Doris.
Johnny
Top

Have people seen Michael's photos from Carmel? Still coming through: 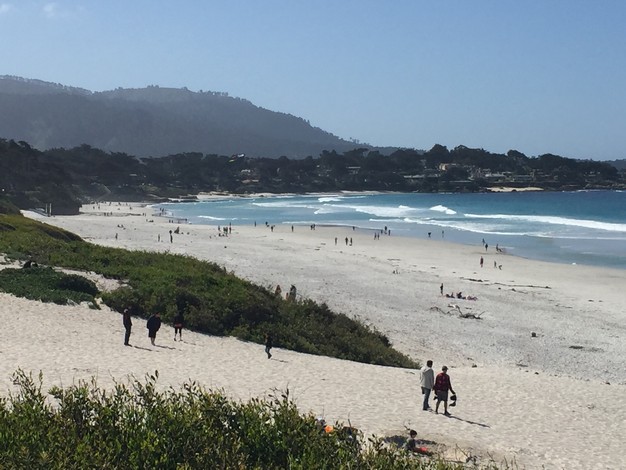 Thought I would post this great info here also - to honor Doris Day's birthday, MeTV will be showing several of Doris's shows - check this out for more info:

HAPPY BIRTHDAY Dear Doris!!!!
Mary Anne
"The BEST is yet to come."
Top

Great banners, and thank you all.

Love the pictures from Michael, wish I were in Carmel, It's very sunny.
Top

A much better colour version from Puck, messed around with a little by me. Thanks Puck:

Doris' 92nd birthday is this Sunday, and she has been anticipating the annual deluge of birthday greetings for months. She isn't fond of birthdays, but she just loves hearing from all her fans and friends who have followed her career and hold her in their hearts. So, in keeping with tradition, the team at the Doris Day Animal Foundation has posted a special birthday card to celebrate the lady we admire most.

Please join us in wishing Doris a special 92nd birthday – and many more!
http://salsa3.salsalabs.com/o/50866/92nd-card

This year many of you will gather in Carmel for a weekend of all things Doris. But for those at home, please know Doris' biggest birthday wish is that every 4-legger have a warm bed, plenty to eat, and lots of love. Hug your babies for her! The best way for you to participate in the birthday joy is to sign Doris' card and then make a donation, no matter the size, in her honor.

We can't wait to share all your birthday well-wishes with Doris!

Thank you, Jas, and Byan, that was quick of both, and you gave that wonderful finshing touch to it, thank you.
I already sign that special birthday card. 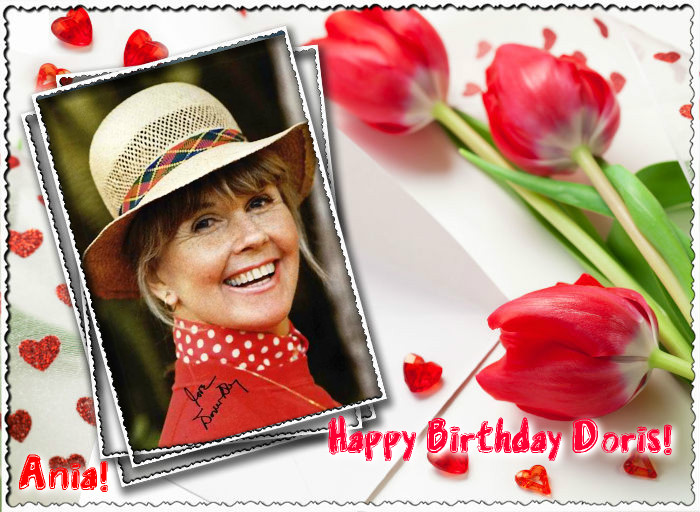