The Doris Day Web Forum - an unofficial forum for fans of Doris Day.
Forum rules
Treat others as you would like to be treated.
Post Reply
First unread post • 87 posts

As promised, Michael has sent the first photos from Carmel on the occasion of Doris Day's 92nd birthday.

Sent by phone with the caption:

"My son, Sean, and me at the beach plus other shots of the beach and the Cypress Inn.

A gorgeous, sunny day in paradise." "Tonight there was a small gathering of about 22 fans at Doris' hotel, The Cypress Inn, in the heart of Carmel. The theme was Doris Day in the 1960's. Lloyd Jessen, Donna Addison and Wanda Hewer co-hosted the party. The table settings and decorations were provided by Donna, and they included photos, placemats and small posters from her films.

The highlight of the evening was a phone call from Doris, who spoke to each person individually. Her voice was vibrant, clear and very upbeat. Everyone was touched by how gracious she was.

We also watched a video that I put together, with tremendous input from several other fans, titled "Doris Day: Golden Moments From The 1960's."

Scott Dreier joined us and he was as warm and personable as you could imagine. We also got to meet Doris' co-star on The Doris Day Show, Bernie Kopel. He was very nice and delightful to chat with."
- Michael Hadley "WOW" (as Jack Carson wrote on his notepad in ROTHS)
Wish I could be there... Great photo's from Carmel and the party!!!

Have a great "BirthDAY" time all!!!
And to Doris: "Lots of healt and luck!!

Michael thank you so much for sharing these pictures of Carmel and the celebration of our beautiful Doris. I hope you continue to have a wonderful time in Carmel celebrating the birthday of the best entertainer ever.

Happy birthday to our leading lady,thank you Michael for sharing these! Thank you all - and for the great card, Dorine. And today, Sunday, is Doris' birthday!

I was out for a lot of yesterday so I have some catching up to do with Michael's photos. Scott Dreier, Jackie Joseph, Bernie Kopell and Kym Kareth & Brian Nash from "The Thrill Of It All" Photos from the luncheon, hosted by Donna Addison. Followed by a screening of Michael's film, "Doris Day - The 1960s", which I believe he is going to make available for everyone when he gets back from Carmel, so look out for that. Scott performed his personal tribute to Doris tonight to a room full of adoring fans and friends. He sang many of her signature songs along with several lesser known, but equally worthy numbers, including Shaking The Blues Away and Put 'Em In A Box.

His show is partially autobiographical and he is one of the most sincere and humble performers I've ever had the pleasure to see. In many respects, he expresses what many of us feel about Doris through his heartfelt performances. His show is a valentine to Doris from a talented and personable performer. Bernie & Jackie along with Kym Kareth and Brian Nash from "The Thrill Of It All" kick-off the auction with all of the proceeds going to the DDAF. Thanks Bryan and Michael for sharing. Looks like a fantastic special time. Thanks Dorine for the card above. Waiting in anticipation to see if there is any appearance by Doris at Overlook. Happy birthday and sincere wishes of continued health and happiness going out to the fabulous Doris Day.

What a wonderful way for the Forum members to attend these events vicariously. Good work, Michael! It'll be interesting to learn the dollar results of the auction for DDAF.
Top

The pleasure is all mine.

We are hoping there will be a visit to the golf course today to see Doris, but no official word yet. Stay tuned.

Sharing your beautiful Carmel photos allows us to join in and celebrate Doris' birthday in a special way..

Thank you Michael for your kindness.
Johnny
Top

Michael - As always, your kind generosity leaves me speechless. Thank you for bringing the Carmel "event" to all of us and making us feel as though we are there with all of you. In a way we are, because DD Fans have a bond that is unique and genuine and for the ages.
Top

Michael amazing pictures♥ Michael envy you and all the fans who are having a great time... All photos fantastic♥ 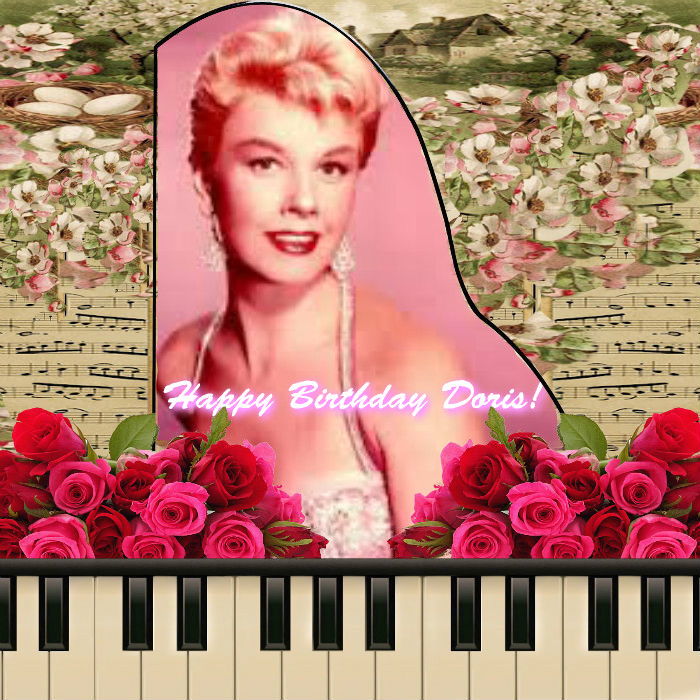 Rats!! I guess Doris decided against a balconey greeting:( Oh well, she did make yahoo.news about age just being a number and last years yellow hat and sunny smile says it all. Glad everyone had a grand time. Doris sounded it too on the phone calls to the festivities.
Top

Ray, the Day isn't over yet!

To add to the birthday fun and celebrations, Paul has written a great piece honouring Doris on this special day as we remember how much she has meant to us over the years.

People Exclusive: Doris Day Speaks Out on Her 92nd Birthday:
'Age Is Just a Number' 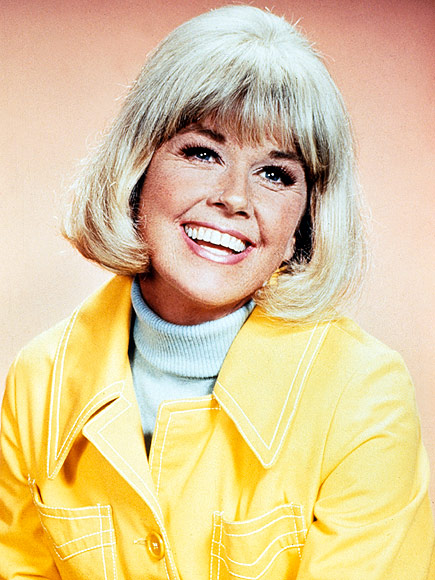 Legendary songstress and screen star Doris Day turns 92 on Sunday, but she tells PEOPLE she doesn't think about her age. "I'm not really fond of birthdays anymore," she tells PEOPLE in an exclusive statement. "Age is just a number. How you feel and live your life is more important."

Day will spend the day surrounded by a few close friends and her beloved pets. While she spends her time quietly these days in Carmel, California, Day told PEOPLE in a rare 2011 interview: "I love life. I have my pets around me and good friends. I'm young at heart and I love to laugh. There's nothing better."

Born Doris Kappelhoff in Cincinnati to music teacher William and homemaker Alma, Day first began singing on the radio and broke through with her big-band hit "Sentimental Journey" and quickly shot to stardom.

After going solo in 1947, she successfully auditioned for Warner Bros. and was cast in a handful of romantic musicals, including Romance on the High Seas.

In 1956, she starred in Alfred Hitchcock's film The Man Who Knew Too Much, in which she recorded the Oscar-winning song, "Que Sera, Sera."

In 1959 she starred alongside Rock Hudson in Pillow Talk, which earned her a Best Actress Oscar nomination, and marked the beginning of a close friendship with her co-star. "He called me Eunice," she told PEOPLE in 2011 with a laugh. "He'd come into the makeup area hollering, 'Eunice, I'll be over with a doughnut!'"

For years, she was the top box office star in the world. But off screen, Day faced many challenges, including three divorces and the death of her beloved son, Terry Melcher, in 2004. "I have had a lot of sorrow, and I still feel that," she told PEOPLE in 2011.

Day spends her days taking long walks in the garden, tending to her animals, answering fan mail and helping with her Doris Day Animal Foundation.

On Saturday, the DDAF hosted a 92nd birthday party and fundraiser in her honor. "The Doris Day Animal Foundation team is putting on another big celebration," she told PEOPLE in her statement. " And I am so grateful and honored that fans and friends come from all over the world to help support the precious four-leggers."

I can understand how Doris feels but I like to think that we, her fans, are celebrating her, not her age specifically. I don't think any of us can understand what it's like to have a 9 in front of your age number and perhaps we take that for granted with Doris?

But we know, as you age, that your body can't do what it did 5-10 years earlier as easily. And most people don't live into their 90s anyway. Bette Davis said that being in her 80s was 'awesome'. I can imagine getting to my 80s but not sure about 90s!

But we're all glad that Doris has and hope it continues.
Follow Remembering Doris Day: https://twitter.com/DayRemembering
Top

Michael has come through with the balcony photo! (See, Ray!) The end of a perfect Day! Quite a few people up there if you look closely - and down there: Thank Michael - great job. I nominate you Doris Fan of the Week!

Glad you liked these from the golf course.

Brian Nash, who played her son in The Thrill Of It All, spoke to her via cell phone and expressed how good she and James Garner were to him and Kim Karath on the set. This made Doris cry but she recovered quickly and told everyone how nice we were and how much she appreciated our being there.

There were fans from Ireland, Great Britain and New Zealand present.

And every shop I walked into today was playing Doris Day songs. The whole town is crazy about her.

The "People's" article continues to be splashed on the YAHOO lead page. The current story is amplified from the earlier one, and is under the caption LIFE STYLE. Earlier today the story was covered under the caption CELEBRITY. Try to catch it before it disappears.
Happy Days, Texas Gonzalo
Top

FLASH!!! Just moments ago another article appeared under the CELEBRITY caption on the YAHOO newspage. This is an exclusive People"s photo of Doris with her dog Squirrely. The photo is supposed to be the most current picture of Doris, and she looks great. She was facing the camera when the photo was taken. Webmaster, see if you can capture this photo.
Happy Days, Texas Gonzalo
Top
Post Reply
87 posts