Time for some colour and one from Puck:

Thank you Bryan and Puck for a beautiful Doris banner that brightens this Sunday.

Doris always shows a wonderful, peaceful composure in all her pictures.
Johnny
Top

Thank you Bryan and Puck! These banners are beautiful. I love the red (my favorite color) it looks so good on Doris. I've been thinking about all the things going on in this country and what a treasure Doris has always been. She is always so positive, never used the awards stage for her own political agenda. She is so joyful and grateful to her fans. She is always a lady and never said hurtful things. She has such a kind and giving heart. This is why I love her so much. She is the best!

Tybear, very well said. There is so much about Doris's character to admire. She's always been so classy; I wish more celebrities would emulate her.
Top

Here's another from Puck:

Thanks Bryan and Puck for this beautiful Doris banner from April In Paris. Doris looks radiant in the white lace dress.
In 1952 Doris was 28 and Ray Bolger was 48. Imagine Donald O Conner or Gene Nelson in the Bolger role and the film would have had a stronger romantic story.
Johnny
Top

Someone agrees with you on IMDB, Johnny:


A late-night viewing of this period piece shows it to be a charming and amusing glimpse into an earlier time. Doris Day holds up well, brightly singing, dancing, and portraying the all-American girl with gumption. Bolger's dancing is phenomenal, but the chemistry between them is not really there; it's hard to believe they really like each other very much." 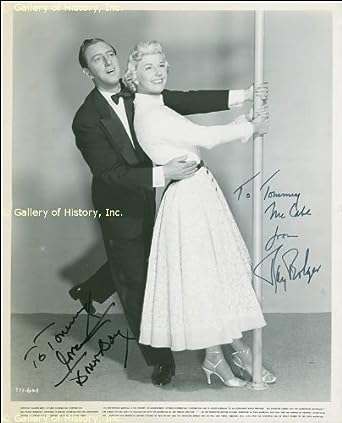 
Doris Day writes in her autobiography that she only encountered trouble or tension on two of her Warner Bros. films, "Young at Heart" and "April in Paris". On "Paris", she writes that leading man Ray Bolger and director David Butler clashed early on, with Butler accusing Bolger of trying to steal scenes away from Day. Doris says that, being a relative newcomer to films, she was unaware of Bolger's tricks and managed to stay out of the line of fire."

(I imagine the "Young at Heart" tension might have had something to do with Sinatra banning Martin Melcher from the set?)
Follow Remembering Doris Day: https://twitter.com/DayRemembering
Top

I agree Johnny, of all Doris' leading men Ray Bolger is the least suitable by a mile - and added to this - he wasn't very nice professionally - according to Doris in her book.
Top

Puck, you've outdone yourself with this beautiful "April in Paris" banner. Gorgeous job - thanks!
Like Irene Dunne done.
Top

Amazing banners Bryan, and thank you all, and especially Bryan, do love " April in Paris", Bryan did create a great banner of that image.
Top

Thank you all (on behalf of Puck!

Here's another one from her:

Thanks Bryan and Puck for this vibrant and beautiful Doris banner. The blue is perfect and really compliments her eyes. The red lipstick and white jacket work with the blue to make Doris look like the all- American girl.
Johnny
Top

Thanks all - and Puck.

I realised after I did this that she's not singing "Everybody Loves My Baby" there.

Yes, Eddie Fulton is the name I was trying to remember!

I tried to find a pic of him but couldn't. But this is the real Marty (Mo) Snyder:

This is as an exquisite Doris Day banner that looks so contemporary.

I love Doris' composed look with the warm, muted, amber background. The small pops of turquoise on her jewelry add elegance but it is Doris' smile and laughter in her eyes that is most striking and unforgettable.

From Puck - only a few days to go now to Doris' birthday: