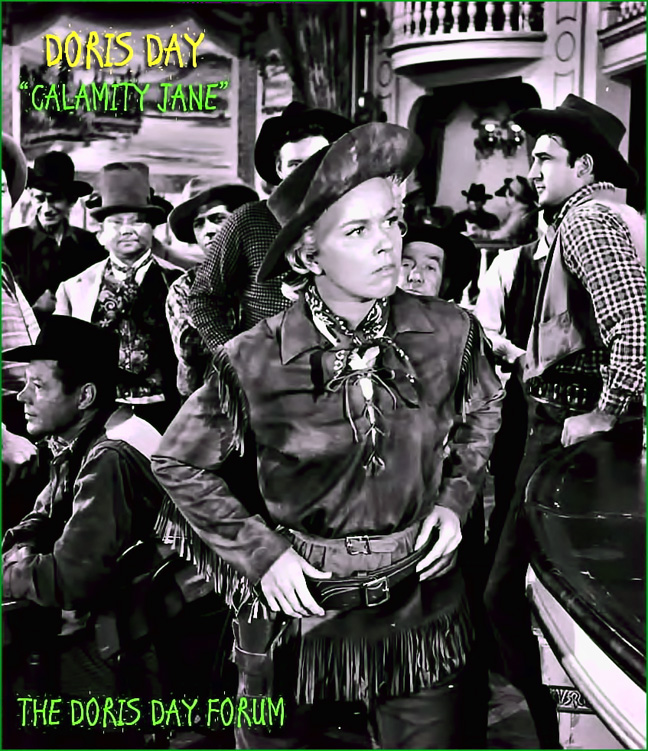 This black and white Calamity Jane banner is beautiful. Doris Day and Howard Keel make a striking couple. This banner brings back warm and happy memories.
Thank you.
Johnny
Top

Another beautiful Calam banner- Doris is breath-taking in this role, especially when she finds her feminine look.
Top

Good to start off the year with this nice banner. Thanks, Bryan.
Top a great picture to start another year with this banner
As we journey under our individual umbrella's,we should not forget we all share the same sky.Doris Day
Top

Thank you Puck and Bryan for your well wishes for my mom. She is better and coming home with home health on thursday. Calamity Jane is one of my very favorite Doris movies. I love the music and Doris does a wonderful job in her portrayal of this character. You all always know the perfect banners to post to brighten up my day. Thank you so much for the awesome job you do keeping this forum going and honoring Doris.

Great Calam pic but "bad movie" - no no no!
Top

Thanks all - and Dorine for the interestingly-autographed photo - when Doris went through a period when she thought that all her films were terrible!

Thanks Ania, I love the looks they are exchanging!

She was so beautiful in Calamity Jane.
Top

Love the caption on this banner!
Top

This is the image I asked Puck to colour - a publicity shot from 'Pillow Talk' found by Peter:

And this is the result - pretty impressive, I think:

Perfect coloration, Puck. Even the eye color is accurate (Doris herself described her eye color as blue-grey more than just blue).
Top

Thanks Bryan and Puck for the beautiful colourization of this Doris banner. It is remarkable work. I also love the black and white edition.
Johnny
Top

Thank you Bryan and Puck ... this banner is absolutely stunning!
Like Irene Dunne done.
Top

The PT banner is stunning. Puck has done magnificent work with the coloring on this. It screams movie star!

Yes, you're right, Michael. Looking at it again. it does say 'move'. And thinking about it, even when she said she didn't like her movies ("they were all terrible"), I doubt if she would really include "Calamity Jane" (Or Love Me or Leave Me, Pillow Talk, the 'Moon's' films, which she speaks of with great affection, and many more.

But I'm not sure you've really nailed what she did mean, Micheal!

Someone told me they had a conversation with her once and she mentioned that none of her films were in the AFI list of 100 greatest films http://www.filmsite.org/afi100filmsA.html and that she seemed upset and said something like "Maybe none of them were any good". I can't help feeling it was something like that, or that itself, that prompted her comment "they were all terrible", which I think was of the moment and not how she really feels. And we also know she's a very modest person!

Great natural looking banner, thank you Puck and Bryan making this a welcome place to visit every Day!!!
Keep up the good work all!

Thanks all - and Peter for finding the photo!

Here's another version from Puck - refresh the page if you don't see it at the top:

Thanks again Puck and Brian for this new colour edition of the Doris banner. The subtle shades of blue with white give depth, texture and new meaning to the picture. Doris looks like she is smiling from the heavens. It is truly beautiful work.

Users browsing this forum: No registered users and 21 guests