Thanks Johnny, it's a pleasure to look back on it and a reminder to myself to watch it again soon. Wouldn't it be wonderful if we could all watch it together?! Here's a link to the lyrics to "Racing With the Clock" and other songs from the film:
http://www.allthelyrics.com/lyrics/the_ ... 80588.html

IMDB Trivia
Frank Sinatra turned down the lead role, which would have paired him with Janis Paige, who played the role on Broadway. As a result, Paige lost out on playing the part to Doris Day, who was considered a bigger box-office draw.
George Abbott wanted Marlon Brando to star.
The soundtrack LP, released by Columbia Records, vaulted to ninth position among "Billboard"'s popular albums.
Mill/garment worker in 1954 (when the play was written) made on average about $1.25 an hour, or about $50 a week. The raise would add $3.00 to each paycheck, so the 7-1/2 cents would be about a 16% increase. 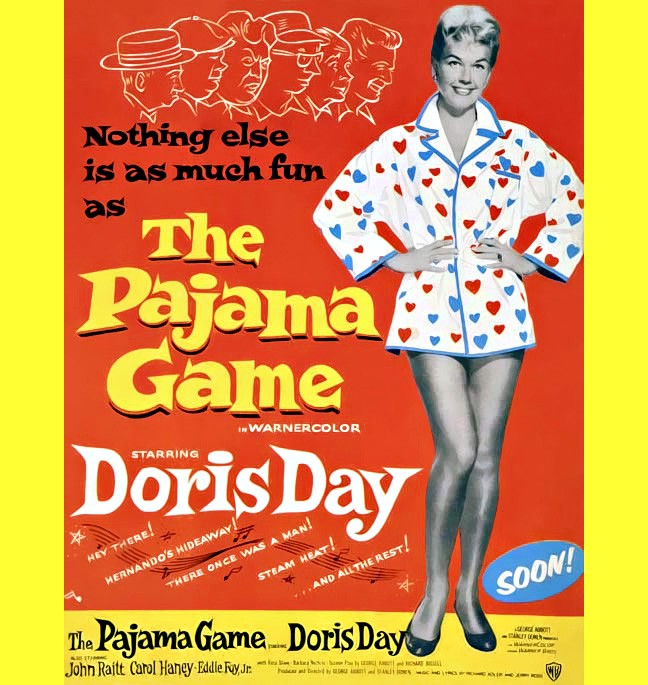 Maybe this post would be more appropriate in a different topic, but it also fits with the banner and so here goes: Film historian John DiLeo, who has been very complimentary of Doris's movie work over the years, wrote a book (2002) titled "100 Great Film Performances You Should Remember -- But Probably Don't," which covers 80 years of cinema. One of the 100 performances he writes about is Doris's in Pajama Game, describing her as being "in peak form." He concludes that chapter, "Even in wretched movies, Day managed to shine -- a shine as bright as the one on that long overdue honorary Oscar the Academy ought to be polishing up for her."
Top

Music lover, your post brought to mind what my father always said to us about Doris Day movies- There is no such thing as a poor Doris Day movie, she always makes us feel better about going to the movies and always gives a sincere performance. Needless to say, Doris Day was and is our family's favouite actress.
Johnny
Top

Thanks Musiclover for that information -

The Marlon Brando suggestion is interesting - however, I am glad John Raitt got this chance [at least] to be immortalised on the big screen - and he made a very good [and sexy] co-star for Doris.
Top

Doris is the favorite actress in my house as well. She was and is the very best of the best. There is no comparison as far as I'm concerned. No actress past or present can hold a candle to her. She definitely was oscar worthy many times. She's the classiest most talented entertainer ever in my estimation. I can't believe she's going to be 93 in a month.

The Pajama Game complete movie can be watched for free in its entiriety under the thread watch the pajama game online free-viewster. If that doen't work try www.viewster.com/movie/1050-10464-000/t ... ma-game/#1.
Enjoy and Happy Days, Texas Gonzalo
Top

Doris looks so striking and radiant in the yellow blouse. It is really a contemporary look.
Johnny
Top

Nice banner, great film... Depressed... start The Pajama Game and for me it works. My mood will change to the better.

Love Doris (film)version of "Hey There", love to have that one (complete) on cd/mp3 but...


Hey There you with that star in your eyes....

Bryan and Puck - love your creativity with all of the Pajama Game photo banners - the colors pop and Doris looks so happy - keep em coming. It is so nice to have these great photos resurface so that we can remember the 'good old days' when Doris was on top in the movies - to me, she is still on top!!!! Hope everyone is having a good week and that your weekend will be spectacular - a few days till springs - can't wait. Enjoy and thanks again guys!!!!
Mary Anne
"The BEST is yet to come."
Top

As always wonderful banner!♥ LOVE IT♥

Thanks all - here's a little break for portraits:

Bryan, Another beautiful photo of Doris - love this one very much...her eyes speak volumes. As I said before, keep ;em coming! Thanks for ALL you do...hope Doris gets to see some of this...
Have a great week ahead.
Mary Anne
"The BEST is yet to come."
Top

Ah, what a beautiful banner, simply amazing is.♥♥ Pure magic and such an amazing, captivating look Doris♥♥ LOVE IT!♥♥

Beautiful photo of Doris, there is a Mona Lisa quality in her eyes.
Thank you.
Johnny
Top

Here's another one of our gal to start the week, which is nice and sunny in London.

This is a really beautiful Doris banner. Thank you Bryan.
Another caption variation that comes to mind: When we first saw Doris on the silver screen, she took our breath away and we all fell in love with her.
Johnny
Top

Thanks Johnny, I'm sure everyone agrees with you!

This photo has caught my eye, another great (feeling) one from Peter:

I love the timeless elegance and sophistication that Doris shows in these early photos.

Thanks Johnny. I think this one has a gothic feel about it - it could easily be from one of those early film noirs such as "Laura", "Gaslight", etc.

Great banners, do love the blank and white classic photo

Thanks Ania, - and Puck - some of yours coming shortly.

Wonderful banner Bryan, I really like this image Doris

Users browsing this forum: No registered users and 10 guests