Beautiful banner Puck- I love Doris' costumes in this film. Milo Anderson did a great job - as of course did the girl herself DD.

Superb banner, Puck. The large center photo is very close to being my all-time favorite.
Top

Thank you Bryan, it looks marvelous, do miss this forum a lot, but busy with family, and also my partners illness, and his retiredment takes a lot of my time. Thank you for placing this image as banner.

And thank you all for those kind words

Thanks, Puck, good wishes to you and your partner.

I was reading The Ballad of Josie posts by Johnny & Musiclover and looking at the photo from Peter and thought maybe it was time to take another quick look?


Checking out the song The Ballad of Josie which was criticized in a review, it seems pleasant enough and sets up the mood for the film. The second song, Wait Till Tomorrow is rarely mentioned. It is sung by The Sun Set. It is not exceptional but it is charming.

The Ballad Of Josie is set in the beautiful Wyoming countryside. Josie defines her widowed character's independence with the response to her father-in-law, who offers her the job as his housekeeper with the line, "I have two hands, I can take care of myself". In Tom Santopietro's book, Considering Doris Day, it describes Josie's response as, "This is not your standard -issue Western woman, and in Day's hands, it's a believable statement that piques the viewer's interest.

As with many other situations in life, looking back often prompts a shift in perspective. Perhaps it is fair to say that The Ballad Of Josie was not given more respect. Doris did not like the film but her performance lifted the film. The supporting cast is effective although their script is not strong. In 1967, Westerns were going out of style. This was a disadvantage for the film. The Ballad of Josie is rarely seen on television but it is worth a look if only to see Doris Day's performance."

Despite the admittedly weak script, there were several elements of "Josie" that I like in addition to Doris's always dependable performance: Her period costumes, the supporting cast, the humor, and the loving relationship between Josie and her son.

Had the film been made a decade earlier, it probably would've gotten much more favorable reviews."

Yes, a sunny Day on a sunny day!

Thanks for the charming The Ballad of Josie banner.

Looking at Doris wearing this sunny costume so beautifully that was designed by Jean Louis made me think about Doris' ability to wear costumes so well from any period.

Doris was striking in her first film Romance On The High Seas when she appeared in costumes designed by Milo Anderson.Who can forget effervescent Doris' first appearance wearing the gray suit and hat with a red sweater in the travel agent shop? This is Doris' first scene in a movie.

Again in costumes designed by Milo Anderson that were appropriately simple and plain for Doris' waitress role in Storm Warning, Doris wore them effectively, contrasting the glamorous clothes worn by her sister (Ginger Rogers).

In her brilliant role as 1920's torch singer Ruth Etting in Love Me or Leave Me, Doris wore the Helen Rose costumes convincingly enhancing her character's believability.

Moving on To The Man Who Knew Too Much, Doris wore the dark, tailored suits designed by Edith Head that added to the tension and constriction felt by Doris' character.

In Midnight Lace, Doris wore the classic, sophisticated costumes designed by Irene that elevated her to the fashion stratosphere. Looking at the film today, these costumes remain impressive and timeless.

Focusing on Doris' costumes, I would be remiss not to mention Ray Aghayan's costumes in Do Not Disturb. Doris wore the orange sequined gown spectacularly.

Doris always wore the costumes, they never wore her.This is a testament to the talent and charisma.
Johnny
Top

I agree about Doris' costumes, although she said she hated her WB clothes and felt she was too contemporary looking to wear period costumes to effect. Certainly from Pillow Talk- her clothes were a main-stream of her films and she wore some fabulous stuff.
Top

Jas said, "I agree about Doris' costumes, although she said she hated her WB clothes and felt she was too contemporary looking to wear period costumes to effect."

I thought that, with a few exceptions, she carried off her roles (including the clothes) in the turn of the century films, Moonlight Bay/Silvery Moon, expertly. The few unbecoming dresses and hairstyles weren't her fault as there were some fabulous designs to choose from that era; the roaring twenties. Ditto in Jumbo, she really looked the part and still seemed modern - in Hollywood terms.

I'm impressed by your knowledge of her clothing styles, Johnny - as I am with yours, Jas, and her hairstyles. It's not something I'm normally conscious of but it falls into that category of 'now that you mention it' so it's interesting to talk about it.

I liked the way she looked, contemporary speaking, in The Pajama Game and Please Don't Eat The Daisies'. There are probably more but it's getting late! 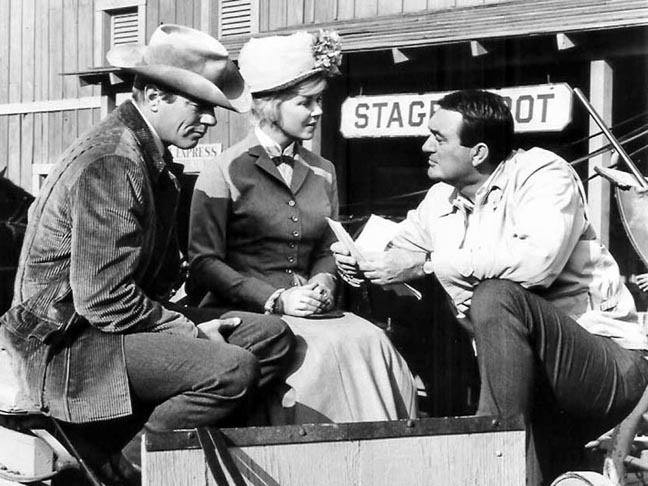 From IMDB:
"In her autobiography, Doris Day wrote that 'The Ballad of Josie' was one of her least favorite films, also citing Caprice (1967), Do Not Disturb (1965), and Where Were You When the Lights Went Out? (1968) - all films her husband, Martin Melcher, signed her to without her consent. She called this a "second-rate television western" that required her to get up at 4:30 every morning. However, she did enjoy the camaraderie of the cast members."

Goofs: Josie gets caught on a roll of flypaper, the type of which was not invented until 50 years after the movie was set.

"By this time in her career, Doris was being forced into roles by her husband Marty Melcher. The forever beautiful Doris looked a little worn out on this production. Filmed on location, the scenery is beautiful and Doris' performance makes up for the simple plot. Its too bad the script was just so-so.

The best scenes are when she is defending her land and causes a women's riot in the town. It is enjoyable to see David Hartman (1970's host of Good Morning America) and supporting star Elisabeth Fraser (who played Doris Day's sister in Young at Heart). Doris is Hollywood royalty although she has never received the recognition she deserves."

"What's not to love about this film? If you can reserve judgment until the end, you'll discover the humorous and heartwarming tale of a woman who is not afraid to stand her ground! Doris Day as Josie, opposite Peter Graves as Jason, is a tremendous force to be reckoned with. In true Doris-style she takes on "the men" of Wyoming, bucking convention (in a great pair of Levi's) and daring them to deny her her basic human rights.

OK, so it only takes 2 glasses of brandy to knock Josie off her feet, but she comes right back swinging all the harder! And when the dust clears, she's there, triumphant to the end. Not only does she beat back an oppressive cattle baron, she also manages to fend for herself and her son, run a sheep-raising operation, endear herself to the women of Wyoming, and win the love and admiration of a pretty swell guy, in my opinion. So who says you can't have your cake and eat it too? I give Josie 10 stars ********** 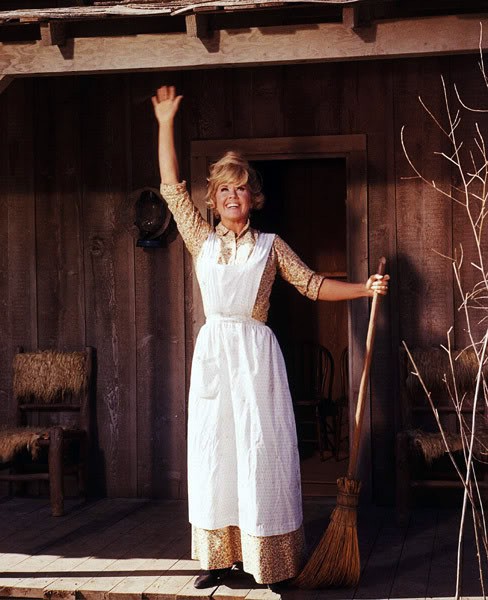 Beautiful banner again, love the 2017 Doris Day Calendar. Stephen, and his team, do a great job every year. I have them all!!! It takes time to make something pretty.

Thanks for this great forum!

Thanks, Peter - yes, he does a great job - all for the love of Doris!

And I was just looking at the amazing photos you uploaded from The Man Who Knew Too Much, etc. I really appreciate all your efforts and great skill at finding these photos.

Wonderful DD calendar! The middle photo in the top line is one of my all-time favorites. I love the pure, unposed joy it conveys.
Top

The 2017 Doris calendar captures the consistent joy and warmth she has radiated over the years. It is a beautiful calendar and banner.
Johnny
Top

Lovely banner, fantastic, I love these all the photos

Many of the Moroccan extras had been mistakenly informed that they would only be paid if they were actually visible in the film. This led to a lot of pushing and shoving to get close to the camera until the crew explained to them that they would be paid no matter what."

"Alfred Hitchcock told François Truffaut that the first The Man Who Knew Too Much (1934) was "the work of a talented amateur and the second was made by a professional". Nevertheless, Hitchcock preferred the earlier version, largely because it wasn't so polished."

"The plot calls for a man (Daniel Gélin in the role of Louis Bernard) to be discovered as "not Moroccan" because he was wearing black makeup. The makeup artists couldn't find a black substance that would come off easily, and so they painted the fingers of the other man (James Stewart) white, so that he would leave pale streaks on the other man's skin (according to Patricia Hitchcock, this idea was suggested by Daniel Gélin)."

"The movie was originally to be produced by Paramount Pictures and Patron, a company to be jointly owned by James Stewart, Doris Day and Alfred Hitchcock. When the film finally went before the cameras, the production company was Filwite Productions, Inc., co-owned by Hitchcock and Stewart. The reason Day was not included in the final production deal has not been publicly disclosed. However, it may have had something to do with Day's husband and manager at the time, Martin Melcher, a man absolutely despised and considered shady by many in Hollywood." 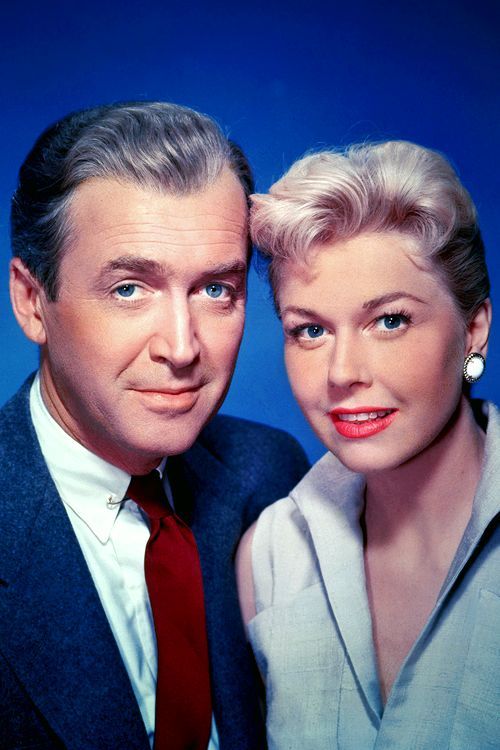 I love this Doris Day/ James Stewart banner. Thank you.

Their kind, good natures compliment each other beautifully.

In The Man Who Knew Too Much they were a really believable married couple that made a perfect team in tracking down their missing son.

Imagine the life Doris may have had if she had married a James Stewart in real life.
Johnny
Top

If Doris married James Stewart, she probably hadn't the career she has had now. She probably would be the women behind him. A good supporter of his work and talents, a mother to his kids etc,

Well that are my two cents.

I should have been more clear. I meant if Doris had married a man with James Stewart's character and integrity, she may have had a happy, lasting marriage.

James Stewart was married to his wife Gloria for over 45 years. They had a wonderful, trusting relationship.

You are quite right, if she had married James Stewart, she may not have become the Hollywood icon she is and would have been content being his wife.
Johnny
Top

Love the new banner of Doris and James,

Thanks, all. I've been in bed with the flu all week - this is the first time I've turned on my laptop since then. I must be getting better - although I still have zero appetite. My audiobooks have been a great comfort!