Thank you to Bryan and Puck for the repost of this glorious Doris Day banner.

Looking at Doris smiling next to a wisteria tree, a sweet butterfly and a mackerel sky creates a joyous feeling

Thank you all. You can probably guess what inspired this one;

Director Michael Curtiz looks on approvingly as Doris Day prepares for the scene below (with stand-in for Eric Blore as the ship’s doctor) in her first film, Romance on the High Seas (1948).
https://www.dorisday.net/romance-on-the-high-seas/ 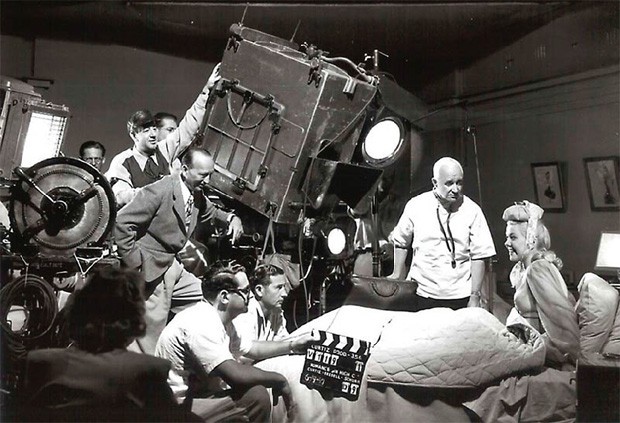 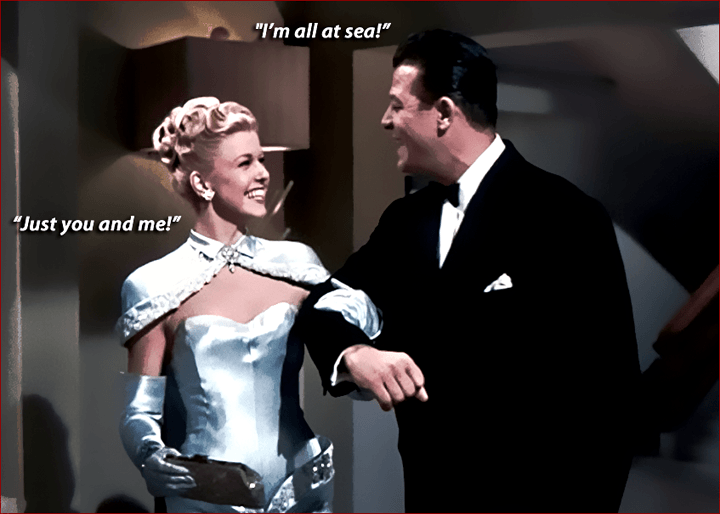 Thanks so much Bryan for this sweet, timely and humourous Doris Day banner. We all need our spirits lifted each day during this worldwide health crisis.

Visiting the Doris Day Forum is one of the bright and uplifting experiences we can share as forum members. Sharing our thoughts and feelings about Doris Day takes us to a comforting place.

Thanks again Bryan! Be well!

Today is the first day of spring.

A little humor goes a long way to help alleviate the negativity in the news today. It's very much appreciated.

Everyone stay safe and remain healthy.

I really like this banner since the scene comes from my own personal favourite Doris Day film. She made better films, but none of them has the effect on me that 'Romance on the High Seas' does. I've lost count of the times I have watched it, and every time when Doris comes on stage to sing 'It's Magic' in the final scene, a shiver of pure delight runs down my spine.

I don't know much about the technical side of film making and was amazed at the size of the equipment (is it a camera?) they are using in that photo of Doris rehearsing a scene from the film. You wouldn't want that to fall on top of you! It goes a long way in explaining the continuity error in the scene where Doris has just sung 'I'm in Love' ("What's that song called?"!). She sits at the table to discuss the deception plan, and has her hands on the table when viewed from the side. But when they put in the camera shot from behind her, her hands are in a completely different position. If the camera was that large, it's not surprising. But, hey, who's complaining?

On a different topic, I read in a San Francisco paper about the passengers from the cruise ship 'The Grand Princess' that was prevented from docking for a while because of Covid-19. Many were taken to Travis Air Force Base where much of the story in 'Starlift' took place. It's amazing to think that almost 70 years on it's still operational, playing much the same role as it did back then.

Robert, check this out:

Coronavirus: five musicals chosen by a musicologist to keep you going during lockdown

Romance on the High Seas (1948)
Although her name continues to resonate through the years, Doris Day remains, for my money, the most underrated performer from the golden era of the movie musical. Indeed, it seems to me that her versatility has never been fully recognised: compare her gut-wrenching portrayal of distress at discovering her son has been kidnapped in Hitchcock’s The Man Who Knew Too Much (1956) to her lively turn singing The Deadwood Stage as Calamity Jane (1953) and you can instantly see that this is someone of unusual ability.
But for one of her sunniest performances, I recommend her debut movie Warner Bros’ Romance on the High Seas.

Thanks Michael, Johnny, Jas (Hang on in there!) & Ania. 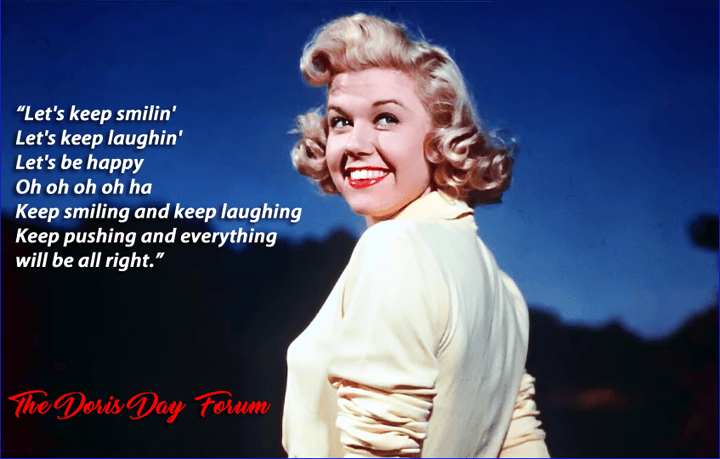 The original - this is quite a large image if you want to download it. 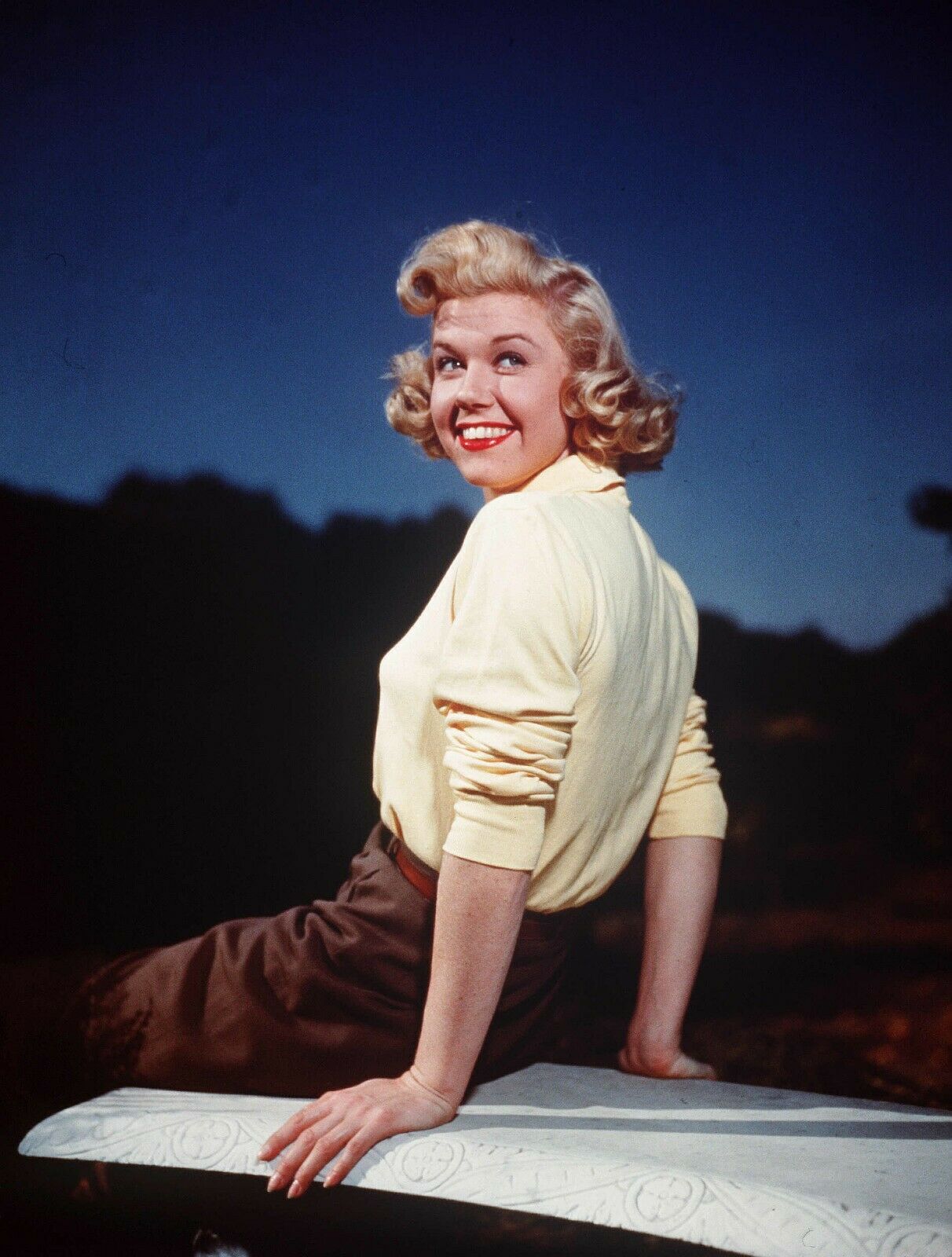 Not sure where I got this - Peter, Ania, online?
Follow Remembering Doris Day: https://twitter.com/DayRemembering
Top

Fabulous banner Bryan, so apt. I never thought the old WW2 song 'When the Lights go on Again' would have such meaning again. Very surreal times, hope everyone is well.

Thanks Bryan for this distinctive and uplifting Doris banner. I love all the light that radiates around Doris' face against the royal blue background.

I can hear Doris singing this and feel the warmth and reassurance in her voice that will tell us everything will be alright. We ñeed to believe this right now, more than ever.

It is the perfect banner for this time. Thanks again Bryan.
Johnny
Top

Thanks for the link to the five suggested musicals to keep you going during a lockdown. I agree with the writer (referring to Doris) that, 'While she was an unknown compared to several other actors in the movie, who include Janis Paige, Jack Carson and Oscar Levant – not to mention popular character actors Eric Blore (Top Hat) and S. Z. Sakall – Day completely steals the show. Watch as a star is born right before your eyes.' I only realised the other day that Janis Page is still with us. She was born the same year as Doris.

"Roberto" is a Fred & Ginger film, isn't it? Glad Janis Paige is still alive - hope most of the rest of us are after the current spreading of the coronavirus - looks like New York is having a particularly bad time.

That's a great graphic. Very 50's Sci Fi with the BW reaction shot of Doris against the green virus backdrop.

I love the dark humor of this.

I love that pic of Doris from Julie.

Yeas Bryan, we can only keep going on and get through this - hopefully.

Re NYC - my heart breaks.
Top

Thanks Ania, if you'd like to do one please feel free and send to me.
Follow Remembering Doris Day: https://twitter.com/DayRemembering
Top

I wanted to say thanks again for keeping the forum open. Beyond providing a place for fans to share their grief about losing Doris, it has given us a safe harbor to comment and feel connected in an era of isolation and social distancing. You've demonstrated a tremendous sense of leadership and compassion by allowing the forum to continue.

Thank you so much.

Thank you, Michael, as always. I guess I needed a bit of time to deal with her passing. It's still sad that she's not with us, isn't it? But we seem to be dealing with it!

Like Michael, I wish to express my sincere appreciation for your effort in keeping the Doris Day Forum going.
Now more than ever, this DD forum is a needed welcoming and comforting community to visit and share our thoughts and feelings about our muse, Doris Day.

In this liminal time when we are experiencing feelings of isolation , the Doris Day community helps us feel connected.

Thank you again Bryan for your dedication and hard work. It is truly appreciated.
Johnny
Top

Thanks, Johnny, appreciate your comments. Here's Doris to the rescue again.

Remembering Doris on the first birthday she's not with us - image by Puck:


I created this video to honor the actors who played Doris’s children in her films and television series. It was supposed to be part of the Fan Event that was scheduled for tonight at Julien’s Auction Gallery. Because we weren’t able to view it together as a group, I felt it would be appropriate to share it online.

My sincere thanks goes to Scott Dreier for giving me this opportunity and for his expert guidance throughout the creative process.

I have a second video that I will post in a few days.

Michael, this is really sweet. I think Doris would love it (and would probably be in tears like I was at the finale). Thank you!
Top

Michael, thank you so much for that beautiful tribute to our Birthday Girl. So very moving, there were tears in my eyes too. I'm really sad we couldn't have watched it at the fan event at Julien's Auction Gallery, I was so looking forward to the week in LA.

However, the good news for me is that I got vouchers to refund me for all my air travel, so when this terrible virus has gone I will be able to start planning another trip. I'm sure there will be many more Doris events to enjoy.

For now though, I'm confined to my apartment trying not to go crazy. Thank goodness for Doris' films and music.

Love the new banner from Puck. Kate McKay is one of my favorite Doris characters.

So glad you guys liked the video. It was pure joy to work on it.

Robert, that's good news about your airfare vouchers. Happy to hear that, sad we didn't get to meet each other.

"There's nothing in my bedroom that bothers me."
Top
Post Reply
671 posts