Judy (Musiclover) has been out of town, and will be for another week, and has asked me to post this on the forum under the music section.

Richard Barrios, a film historian, had high praise for Doris in his 2014 book Dangerous Rhythm: Why Movie Musicals Matter. Several verbatim excerpts are combined here to make up his overall assessment of her, beginning with his comment that she made "musical gold transcend mediocre material" [at Warner Bros.].

"Doris Day made her film debut in 1948 [and] she was the goods, no question about it, yet Warner Bros. put her in a series of retreads. Only twice did Warners allow Day the opportunity to shine where songs and script blended well. One was Calamity Jane, in which her vibrant expertise made it easy to forgive the Xerox-Annie Get Your Gun circumstances. Later . . . The Pajama Game gave definitive proof that movie star casting can sometimes be the best thing to happen to a filmed version of a Broadway show. In both roles, Day . . . moved from speaking to singing, not only smoothly, but with a uniquely vigorous conviction that was exactly what musicals needed.

"Like Garland, Day possessed some sharp instincts about how acting, in speech and movement, might be an extension of musical phrasing. Romance on the High Seas was her first film. The songs were excellent, and so was Day. If Betty Hutton was extroverted to the point of exhaustion, Day is more soulful and welcoming, at ease showing emotion through song more than through dialogue. It's Magic [was] delivered by Day with a kind of contained ecstasy.

"It would have helped her to be at a studio less capable of outright bilge like April in Paris or less obsessed with constant remakes. Unimaginative scripts and direction were the problem here -- never Day. As fine -- superb, really -- as she was in The Pajama Game . . . her only further try [in a musical] was Billy Rose's Jumbo.

"Day's work has endured . . . and she was so wonderful at what she did that sometimes it's hard not to feel ungrateful that she couldn't have been given better, or more."

Thanks for that, Judy! I found it so interesting, being a big fan of musicals, that I did some further research and found the book on Amazon and captured the pages that mentioned Doris, which you've quoted from above.

So here are the pages, thanks to Judy and a YouTube interview with the author below. 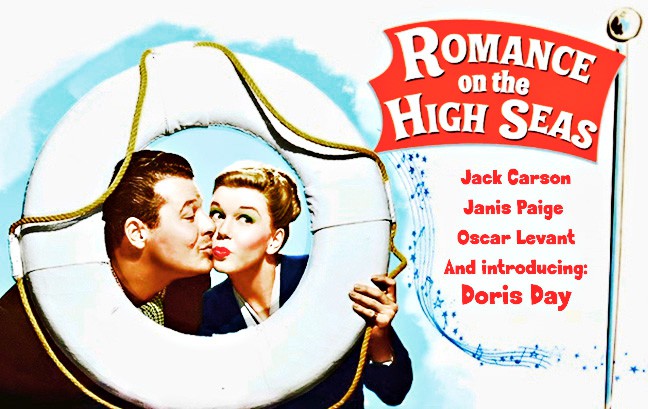 I'm not sure about his box-office analysis. Calamity Jane, The Pajama Game, and Jumbo all made $5 million at the box office in the US alone, quite a lot for the times, I imagine. Love Me or Leave Me made $8.2m, so if you include other countries, not least the UK, where people always flocked to see Doris Day films. And if you also include video and DVD sales since then, I doubt if any of her films eventually lost money,
Paul Brogan says "Only one of Miss Day’s films failed to show a profit, The Ballad of Josie. And Jumbo, which went into profit only after being sold to television" Again, not taking into account Jumbo's DVD sales. (I know I bought one!

Thanks Judy that was great to read.
Top

Why Movie Musicals Matter is an important topic that I hope generates a great deal of discussion. A sincere thank you to Judy and Bryan for introducing this topic. The movie musical Cats is in production as well as a new rendition of West Side Story.

So many iconic musicals are part of our theater and film histories that have created indelible magical memories. This art remains popular to this very day. Recently we have had Bohemian Rhapsody which was an overwhelming success, Mama Mia, Here We Go Again, La La Land and now Rocketman in movie theaters which is thriving. The film Judy is being released in September.

Some other classic movie musicals are West Side Story, My Fair Lady, Jesus Chris Superstar, Godspell, Grease, Mary Poppins, The Sound of Music, Moulin Rouge, Cabaret, Funny Girl, The Umbrella of Cherbourg, A Star is Born, and the immortal Wizard of Oz.

Of course we have Doris Day musicals, Romance On The High Seas, Calamity Jane, Love Me or Leave Me, The Pajama Game and Billy Rose's Jumbo. It was Doris' authentic singing voice that first made us fall in love with her.

Movie musicals not only tell a story that connects with our human emotions, they are spiritual vehicle touching a universal primal feeling of human experience.

As a separate topic, I will introduce the topic Favourite Movie Musicals.
Johnny
Top
Post Reply
4 posts • Page 1 of 1