Marilyn Monroe has the distinction of being the most photographed person of the 20th century. Books are still being written about her, 55 years after her death.

She was viewed by the industry as a money machine and did not receive the respect she so richly deserved.

Like Doris, Marilyn made a connection with the public that has grown with admiration and love for her over the years. Her life story is both the Hollywood dream and Hollywood tragedy.

I came to appreciate Marilyn's work as an adult. The camera loved her. The more I see her films, the more there is to appreciate. She was a gifted comedienne and her work in Bus Stop and The Misfits is evidence of her skills as a dramatic actress.

Johnny, I remember reading that too [years ago] about MM wanting to do Pillow Talk- I honestly cannot picture her though in the role of a smart confident interior designer living life on men's terms.
Top

On August 11-2014, the brilliant actor and comedian Robin Williams died at he 63. In 1997 he won the Academy Award for Best Supporting Actor for his role in Good Will Hunting. He was nominated three times for a Best Actor Oscar.

Some of Robin's memorable films:

Some of his most memorable films are:
The Grapes of Wrath -1940
Ball of Fire with Barbara Stanwyck
Jezebel with Bette Davis
12 Angry Men
On Golden Pond with Katharine Hepburn for which he won the Academy Award for Best Actor in 1981.


On August 12-2000, the legendary Loretta Young died at age She won the Academy Award for Best Actress in 1947 for her role in The Bishop's Wife with Cary Grant and David Niven.

On August 16-1973, actress Veda Ann Borg died at age 58. She excelled in supporting roles in the following films:
Kid Galahad
Mildred Pierce
Chicken Every Sunday
Guys and Dolls
Love Me or Leave Me

Johnny, you do a good job on this topic. I don't remember Veda Borg in the first 4 films noted, but she didn't really have a supporting role in "Love Me or Leave Me." (She had only one line, and she was uncredited.)
Top

I was 10 when Elvis died- sitting in my aunt's kitchen - she burst out crying when the news came over the television or radio. That was my first indication that "stars" could touch our lives to the extent that we genuinely and truly cared for them.
Top

I agree with you James. I started hearing Doris sing on the radio when I was very young and growing up in a troubled family. In all this time she has been in a special place in my heart.

Heard on the news that Jerry Lewis died yesterday. He worked with Doris on tree Bob Hope Shows. And Doris met him in her Hollywood day's. RIP Jerry- yes, he was a great talent and did so much for charity.
Top

On August 29-1982, the beautiful and talented Ingrid Bergman died on her 67th birthday.

Some of Ingrid Bergman's memorable films:

Lee Marvin won the Best Actor Academy Award for Cat Ballou in 1965. His big break in films came in 1953 when he starred with Gloria Grahame in The Big Heat. He also starred in The Dirty Dozen.

On August 30-1981, the beautiful actress nd dancer Vera-Ellen died at age 60. She once attended the same dance classes as Doris Day when they were children.

Some of Vera-Ellen films:

On The Town
Call Me Madame
White Christmas
Johnny
Top

Some of Troy's films are;

Imitation of Life
A Summer Place with Sandra Dee
Parrish

She starred in My Favourite Wife in 1940 which was remade in 1963 as Move Over Darling with Doris Day.

On September 24-1978 singer, dancer Ruth Etting died at age 80. She starred Kirk n the Ziegfeld Follies. Doris Day starred as Ruth Etting in the 1955 film Love Me Or Love Me.

On September 24-1981 wisecracking actress Patsy Kelly died in 1981 at age 71. She starred as Maggie the housekeeper in Please Don't Eat The Daisies.

On September 24-2003 character actor Lyle Bettger died at age 88. He excelled in villainous roles. His most famous role was in The Greatest Show On Earth as the jealous elephant trainer Klaus who has the elephant holding it's foot above his girlfriend, performer Angel's (Gloria Grahame) face. It is a frightful and unforgettable scene.
Johnny
Top

In September 25-1984 actor Walter Pigeon died at age 87.
He starred in How Green Was My Valley, Mrs Miniver with Greer Garson, and The Bad and The Beautiful.

In September 25-1987 actress Mary Astor died at age 81.
Her most famous role was Bridget O'Shaughnessy in The Maltese Falcon. She won the best supporting actress Academy Award in 1941 for the film The Great Lie.
Johnny
Top

He won the Academy Award for best actor in 1986 for the film The Colour of Money. His other films include Hud, Cool Hand Luke, Butch Cassidy and The Sundance Kid and The Sting.
Johnny
Top

James Dean starred in three major films, East of Eden, Rebel Without A Cause and Giant.
Johnny
Top

On October 2-1985, Rock Hudson died at age 59. He starred in three sparkling films with Doris Day, Pillow Talk, Lover Come Back and Send Me No Flowers. He was nominated for a best actor Academy Award in 1956 for his outstanding work in Giant.
Johnny
Top

He was a major child actor and starred in How Green Was My Valley and Lassie Come Home.

As an adult he starred in Midnight Lace and The Longest Day.

Some of Janet's well known films are:

She won the 1952 Best Supporting Actress Academy Award for the film The Bad and The Beautiful.

Gloria Grahame other notable films are:

Some of Natalie's unforgettable films are:
Miracle On 34th Street
Rebel Without A Cause
West Side Story

Some of Cary Grant's memorable films are:

Thanks, Johnny, Yes, Cary Grant died in Davenport, Iowa, on this day in 1986, 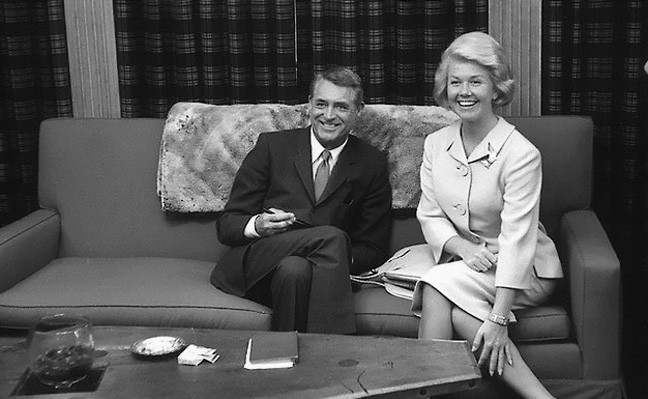 Cary Grant and Doris Day shop for clothes in New York for That Touch of Mink, circa 1962.


The debonair actor starred in films with many of the top leading ladies of the day, including Mae West, Audrey Hepburn, Ingrid Bergman and Doris Day.

In the mid-1980s, after he had retired from acting, Grant visited several cities for fundraisers and to appear in a one-man question-and-answer show.

He was at the Adler Theater in downtown Davenport preparing for an appearance on the afternoon of November 29, 1986 when he started feeling ill.

Grant was taken back to the nearby Blackhawk Hotel (known as “Hotel Blackhawk” today) where a doctor found him to be having a massive stroke.

After being taken to St. Luke’s Hospital, which later became part of Genesis HealthCare System, Grant died at 11:22 p.m. at the age of 82.

The New York Times in reporting his death said Grant was “devastatingly handsome” and “a beloved figure in American film for over 30 years.”

His ashes were scattered in the Pacific Ocean off the coast of California.

Just read an obituary for Peter Baldwin, who died on November 19 in Pebble Beach, California. His name is lesser known than many, but all of us on the Forum will no doubt recognize him as the actor in "Teacher's Pet" who portrayed the young reporter who so annoyed Clark Gable's character. He later became a director of more than 500 TV episodes, including 2 of "The Doris Day Show," and was reportedly a good friend of DD's Cypress Inn partner, Denny LeVett. LeVett was quoted in the local paper as saying that Baldwin was a true gentleman and "a wonderful man to be around." In my book, that's a pretty nice legacy.
Top
Post Reply
386 posts