Shocking to see what's happening in the US since the death of George Floyd - extensively covered over here. 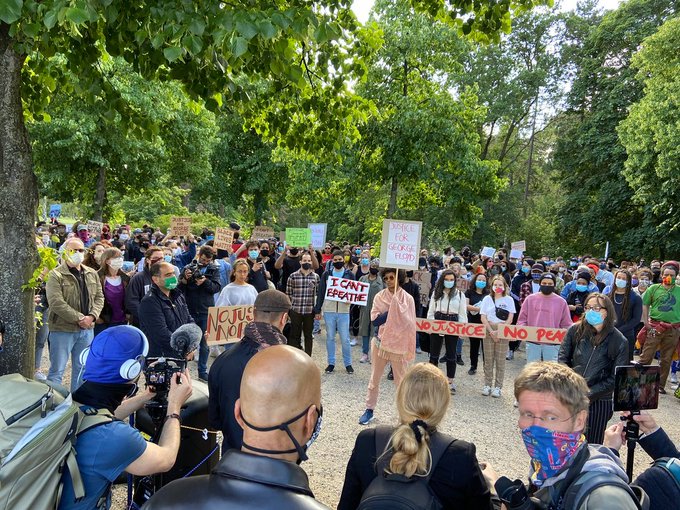 We also had thousands protesting 'in sympathy' in London and Manchester at the weekend.

Cleanup efforts are underway in several cities on Monday following a weekend of protests over the death of George Floyd. The 46-year-old died after he was pinned to the ground by Minneapolis police. One of the officers, Derek Chauvin, was charged with third-degree murder and manslaughter on Friday.

I understand the frustration of these protestors, but this kind of behavior never makes things better - only worse. These are dangerous times, and these rebels are not practicing social distancing, many are not wearing masks, and the only ones who suffer are the innocent owners of establishments that have been trashed and/or burned down, as well as innocent folks who (I hope I'm wrong) just may see a spike in covid-19 victims. These shop owners were hurting prior to the rioting, and now they have their work cut out for them. Very sad.
Like Irene Dunne done.
Top

Yes, I don't agree with looting, burning or violence - being an admirer of the Gandhi school of protest - but black people, as in the UK and other countries, deserve equal rights and non-discrimination. We had a similar situation in the UK some years ago.
Follow Remembering Doris Day: https://twitter.com/DayRemembering
Top

I haven't posted anything online because I can't find the right words. Every time I start to post something, it feels disingenuous, as if someone else's words are coming out of my mouth. The situation is far beyond anything I can fully understand, explain or shed meaningful light on.

But I can't ignore the pain and suffering that black Americans feel and we continue to see example after example of racial profiling, hatred and aggression caught on camera. There is something systemically rotten and we must fix it or our society will crumble. The looting, stealing, and destruction of private property is appalling for obvious reasons but especially now because businesses are struggling to reopen in the face of the Covid-19 pandemic. Some of this is the action of agitators on both sides of the political spectrum and their motives are highly suspect. I still cannot shake the image of the black man in Minneapolis who was just about to open a family business when the protestors torched the building and incinerated his dreams. Those who did this are destroying the very fabric of society they purport to be defending.

At the end of the day, I want lawful justice for the murders of George Floyd, Ahmaud Arbery and other black citizens who've been unfairly targeted and I want a return to civil order without undue violence or loss of life.

"There's nothing in my bedroom that bothers me."
Top
Post Reply
4 posts • Page 1 of 1