Howard,
Lucky you! It sounds like it was a wonderful opportunity to hrar stories about Teacher's Pet and Doris. I thought the chemistry between Doris and Clark Gable sparkled. Thanks for sharing.
Johnny
Top

Great story Howard - I loved hearing recently [via Paul I think on another thread] that Katherine Hepburn praised Doris' portrayal of the journalist professor in this film- I just love to hear things like that - I have said it before, but will again- I think this is [possibly] Doris' finest on-screen performance.
Top

Came across an obituary for Joe Lubin, who wrote the songs for 7 Doris Day films. The obit included Lubin's account of how he came to write those in Teacher's Pet. You can find it on the internet by searching for "Joe Lubin the Independent."
Top

Teacher's Pet was released April 1-1958. The screenplay sparkles with intelligent, witty, fast and funny dialogue. The sexual chemistry between Doris Day's and Clark Gable's characters sizzles while they engage in the battle of the sexes.
Doris is perfectly cast as the smart and confident journalism professor Erica Stone. Clark Gable does a brilliant job as the seasoned journalist. Gig Young and Mamie Van Doren add to the hilarity as the supporting cast.
Credit must be given to Director George Seaton who keeps the film crisp and even. Seaton directed the 1947 Christmas classic, Miracle On 34th Street.

Teacher's Pet was the 30th highest grossing film in 1958. It ranks 14th among Doris Day films in terms of revenue. Pillow Talk ranks number one, Lover Come Back is number two and The Man Who Knew Too Much is number three.j
Johnny
Top

While reading The Doris Day Scrapbook by Alan Gleb, I came across some interesting passages on Doris and her work in Teacher's Pet.

Director George Seaton gave some idea of what it was like to direct Doris and Gable together. About Doris he wrote:

Doris, being a professional in every sense of the word, took direction without complaint. In fact she was eager for suggestions. Further. she was and is, a well -mannered lady and since I am considered a well -mannered director, an atmosphere of mutual respect was ever present.

It was smooth.Since Clark was also highly professional, there was none of the unpleasant incidents that occasionally take place between male and female stars. Clark was the kindest and fairest actor with whom I ever worked. All he asked was that am actress playing opposite him be equally fair, without resorting to those cheap tricks designed to gain an edge. Also Clark could never condone anyone being ill prepared or late. Since Doris was always fully prepared, on time and never caused a delay by primping between takes, they got along splendidly. There were times when Doris seemed a bit nervous playing opposite the great Gable but Clark always found a way to put her at ease.
To the question of how he came away feeling about Doris as an actress and as a person, Seaton responded:

...she was delightful person...considerate and vital with a religious commitment that made her treat everyone on the set with dignity and respect. This warm feeling was returned to her by all her co-workers. As an actress she was highly talented within those confines of characterization in which she felt secure and comfortable. However though she never attempted the particular type of comedy called for in Teacher's Pet, she worked long and hard to perfect the technique. To a large extent I believe she succeeded.

Her public believed so too.
Johnny
Top

Thanks, Johnny, that was very interesting.

I just came across another interesting piece on Teacher's Pet: 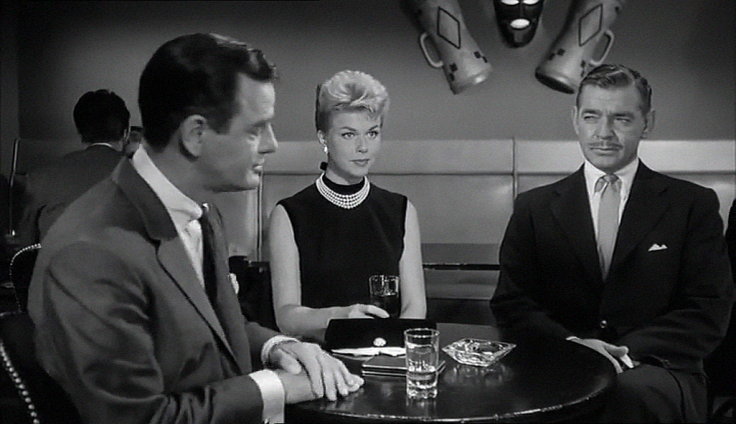 "The year was 1958. Clark Gathe was in the twilight of his career and would pass away two years later from an arterial blood clot, while Doris Day was hitting triumphant peaks after broadening her range and taking on dramatic roles in critically acclaimed productions. The last thing the movie-going public expected to see was a sex-driven rom-com titled Teacher’s Pet, starring the two stars.

The thought of an ageing Gable pursuing Day’s character appalled most people, but surprisingly the initial scathing reactions were for nothing. The film was an immediate success, and fans of the two leading players were left campaigning for more Doris Day and Clark Gable vehicles." So often, the big studios and talent agencies play it safe and cast romantic leads based on box office draw and how they look as a couple. Will audiences believe them as a romantic duo? I’m so glad that formulaic casting did not apply to Teacher’s Pet.

Whatever concerns the studio may have had about the age difference or how much older Gable looked on camera, it didn’t matter because these two gifted actors made it feel so real. You believed them from the moment they shared their first scene together. As was often the case, Doris had the best chemistry with her most masculine leading men: James Garner, Brian Keith, Rod Taylor and certainly Clark Gable. You take that and add an intelligent script, confident direction and two pros who know exactly what they’re doing and just get out of the way.


PS: Rock Hudson and Doris has great chemistry too but their magic existed in its own special universe.
Michael H

In the book Considering Doris Day by Tom Santopietro there is a wonderful passage on Doris' film Teacher's Pet.
It reads:" The enjoyable hostile relationship Between Day and Gable is made clear in their very first exchange regarding the correct attribution of a quotation -- was it Kipling or Emerson? This literate dialogue is quietly charged, and the attraction between the two is obvious, but the antagonism is even more overt. What makes it fun for the viewer is that Day matches Gable every step of the way. When Gannon point-blank asks her, How do you feel about sex?", far from flinching, she instantly retorts "Well I'm all for it". The perpetual virgin? Not here, not by a long shot. Just before Gannon stalks out of Eric's office in anger and disgust, he plants a long, lingering kiss on her, a kiss that results in a classic bit of comic acting from Day. Gable strides out of the room, and Doris gathers up her papers; it is only at this point that her delayed reaction to the kiss sets in: She trips, stumbles, clutches her stomach, blows the hair off her face, and in the end has to resort to fanning herself. This woman has been kissed -- and how.

This battle of the sexes is also a battle of ideas. Along the way there are telling observations about the role of newspapers, Gannon emphasizing that the public must be told why something happened: "The man on the street is a lot more curious than people think"{. Line after line contains not only comic zingers but truly thoughtful analysis about newspapers and the obligation to inform the public."

It is time to watch Teacher's Pet again. This is another of Doris' films that is rarely shown on television.
Johnny
Top

I totally agree with Santopietro. Teacher's Pet is one of my favorites!
Like Irene Dunne done.
Top

I have been researching trivia on Doris Day films and discovered information that I did not see before in books.

This trivia is from IMDb about Teacher's Pet.


Cary Grant and James Stewart both turned down the role of James Gannon because they knew they were too old for the part.


The movie was deliberately filmed in black and white in an attempt to disguise Clark Gable's age and weight.

Jim Gannon is shown defiantly smoking after being asked not to. In real life
Clark Gable smoked four packs a day.

Gig Young's fingers became so sore while practicing his bongo drum routine that he had to have special sponge padding taped to each finger.

Eric Stone's father - Joel Barlow Stone and his EUREKA BULLETIN newspaper was based upon William Allen White , Editor of the EMPORIA (KD), GAZETTE, the "small-town' newspaper read around the world' - which is still published.


When Clark Gable enters the classroom on his first visit and approaches a spinster - thinking it's Professor Stone, (Doris DY), - she introduced herself as Clara Finney: Clara Finney was the nickname that Doris Day's longtime friend Billy DeWolfe gave her and always used it in greeting. Doris Day revealed this nickname during an appearance on THE TONIGHT SHOW starring Johnny Carson.

Teacher's Pet is included among the American Film Institute's 2000 list of the 500 movies nominated for the top 100 Funniest American Movies.

Doris Day won the Golden Flame Award from the California Association of Press Women while the movie was being filmed. The award was for being cooperative with the press, and in honour of her role as a journalism professor.

Clark Gable's wife Ka Williams, a frequent set visitor, kept the company supplied with sweets. She brought homemade popcorn, a half- dozen boxes of chocolates, and even a huge box of fresh pretzels.

For his role, Clark Gable had to learn to type with two fingers and to accomplish a Latin American dance known as the Miringue.

Striving for authenticity in the newspaper city room scenes, producer William Perlberg and director George Seaton cast 67 members of the nation's press in the movie, 53 of whom were flown to Hollywood from 31 states and Canada; the rest were from the Hollywood press corps.