It's an amazing pic, she looks so unhappy, she must be prepairing for the scene there. Thanks for sharing.

Very good suspense movie - with Doris' hysteria scenes [elevator & stairs] really standing out. It was great seeing Rex Harrison (love him), John Gavin (with whom I'd been in love with ever since I had watched "Psycho"), Myrna Loy (always enjoyed her movies!) and Doris - well I don't think this particular lady need a parenthesis She does - I believe she has two - for music and movies Yes that was a little too sugary ! Surprising - she's usually right on. Great photos! I watched this film again recently, it really shows Doris' versatility as an actress. It's a shame the film took so much out of her emotionally. I really enjoy this film. I've only seen it a few times, but I just finished rewatching it and Holy Cow, can Doris Day act. Of course this is no shock to me or anyone else here on the board for that matter, but I believe this has to be one her best roles.
Top

I think her performance in this is much better than in Julie. More modulated and controlled. I love this film a lot. But I've always wondered how the Hollywood "London" plays to people over there.
"I wouldn't bring up Paris if I were you. It's poor salesmanship."
- Rick Blaine, Casablanca
Top

It doesn't, John! We all know it was filmed on a back lot and that Doris didn't do any location filming for it, ditto Caprice, we know that wasn't Doris walking around Paris. The worst was Do Not Disturb - it looked like it was filmed in Brigadoon. The thing that annoys me is that a lot of the Englist charcaters speak like Dick Van Dyke in Mary Poppins.
Follow Remembering Doris Day: https://twitter.com/DayRemembering
Top

To bad these pictures were not shot on location. I think it adds so much to a film to be done in the location its supposed to be in. I must say they do a pretty good job at "trying " to duplicate ,but its never quite the same as really being there.
Bryan you are so right we americans do not do your lovely way of speaking very well. I love the english accent and our actors over here, try hard but just cant seem to get it right.The actors seem to over do it a bit i,d say.

That is an interesting point [location] and it comes up a few times in the Kaufman book where he states not only was 'Midnight Lace' but also 'Do not Disturb' were supposed to have been filmed on location in England. He states Doris did not wish to do this and hence they were shot on the studio lot. If true; it may have made each an entirely different film, however one can understand Doris wanting to be near home [and doggies] whilst still working so hard.
Top

This is another film that apparently Doris didn't want to do but was apparently 'talked into it' by Marty. I think she knew it would be distressing for her. It probably would have been more film noir had it been filmed in London (and in black and white?) but, in retrospect, it's hard to imagine anyone in their right mind wanting to murder Doris! Particularly as she was so nice and looked so glamorous in it - maybe they should have tried to make her look frumpy with a bad temper?

Thank you , Bryan for the neat picture of the "behind the scene " shot of doris in the balcony. I just love the tech side of movie making, I find it as interesting as the actual movie itself.lol It always blows my mind how the magic makers are able to trasnport us into their world...Doris was so good in M L, she made you sit on the edge of your seat ,more than once.

I really enjoyed the film the first time I saw it about two years ago. I re-watched some of its scenes this morning and I this time I thought it was somewhat obvious to find out who the murderer is. I really don't understand why it surprised me the first time!
I still like the film though.
Top

I think films are always fresher the first time you see them - after that you begin to notice other things.
Follow Remembering Doris Day: https://twitter.com/DayRemembering
Top

Well, I finally watched it for the first time and it took me a while to get into it. However, I enjoyed the movie and Doris did a great job in her role of Kit. If she had been Elizabeth Taylor, they probably would have given her an Oscar for her performance. I couldn't get it out of my head though, the real Doris Day would have stood up and slug the guy. There wouldn't have been all of that crying and running to her husband. I know that was what the part called for, but Marty was wrong to make her do the movie. I just had a hard time watching her cry so much.
"Wrinkles are hereditary. Parents get them from their children.”- Doris Day
Top

This movie was on German pay TV about a week ago.

I think it was an overall good movie but I wouldn't rate it excellent. It was a pleasant change to see Doris in a more dramatic role. I know she didn't really like playing that part but I think she's a fine actress and did a very good job.
Top

Domi, yes doris did a great job acting in this movie. Did you know that in the scene where she faints on the stairs ? Well, she really did faint for real in that clip. Doris relived a certain thing in her own life that made her act as hysterical as the part called for , but in the process it really did make her faint. That scene really took its toll on doris, but she rested for a day or so and was able to carry on. What a great actress !!!!
suzie
Top

That's nice. There's nothing better than a good working environment. Myrna Loy was a great actress. I loved her in the movies she did with Cary Grant.
Top 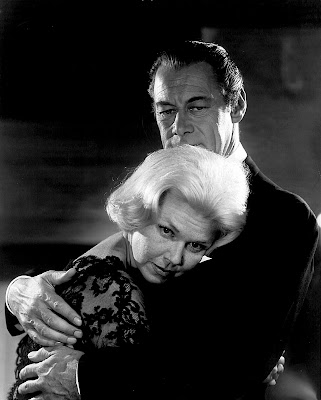 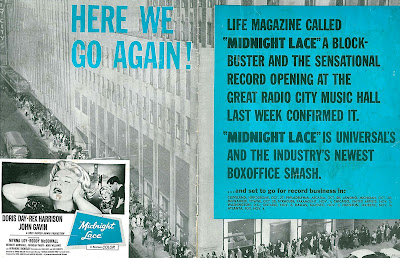 Just surfing on the internet and find these great pictures. I love this movie. I wonder if Doris has ever watched this movie all the way through, or maybe it was even as painful to watch for her as it was to make ? Maybe Mary Anne knows ???
suzie
Top

I haven't seen this movie yet, but if I'm remembering correctly, Midnight Lace is part of a new DVD collection coming out April 7th. But as of now, it's not on DVD. Can't wait to buy the collection!
From looking at the pictures on this thread, Doris looks sooo beautiful in this movie!
PS. I was wrong about Midnight Lace being a part of this new collection. Too bad!!

Does anyone know where I can get the VHS for a reasonable price? Thanks!
Top

I just watched this film last night. Wow!! I thought it was an amazing movie. Doris is just beautiful in it. I love her clothes and her hair. Her acting is absolutely perfect in this movie, especially in the elevator and staircase scenes. I think she desereved an Oscar. It's really awful that she had to suffer so much emotionally while making this movie though. I thought Rex Harrison, Myrna Loy, and John Gavin were a good supporting cast in this movie. Even though the ending had been ruined for me, it still came as somewhat of a surprise, and there was one person involved that I never would have guessed. I really really loved it! I think it's my second favorite movie of all time (right after Pillow Talk).