Starting fresh for the New Year!!! Thank you Peter. The first two photos are new me.

I love Doris in a top hat. She looks like she is having a great time at a New Year's Eve party.

Thanks for your reply, Doris in top hat is great

These are all great Doris photos Peter, it is a good way to start 2017.

I really like the 1955 billboard photo. The Julie photo looks so fresh and natural. My favouite photo is of Doris and Marty at the Academy Awards. The overhead lights make them look like they are under a sky of stars.

Thanks for your reply, I love Doris in that 1958 Academy Awards dress, she used it again at another occasion around 1960. 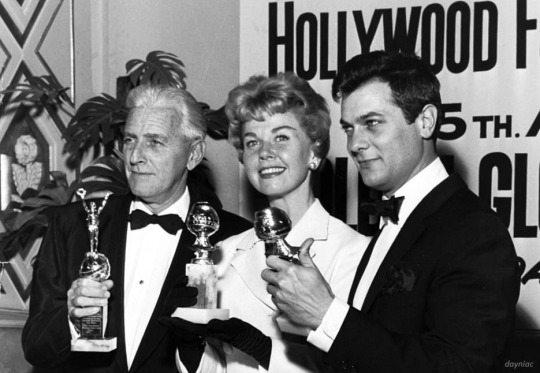 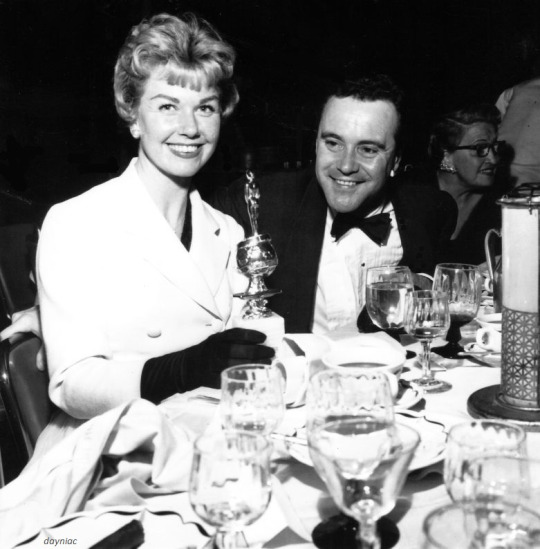 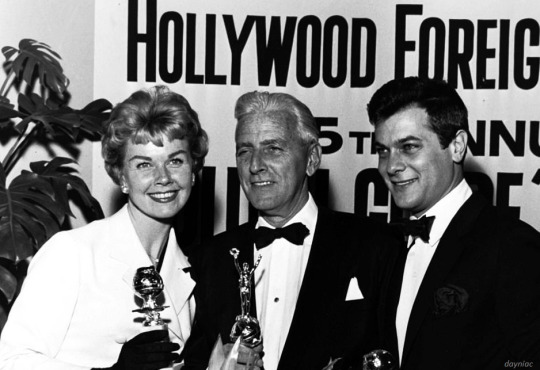 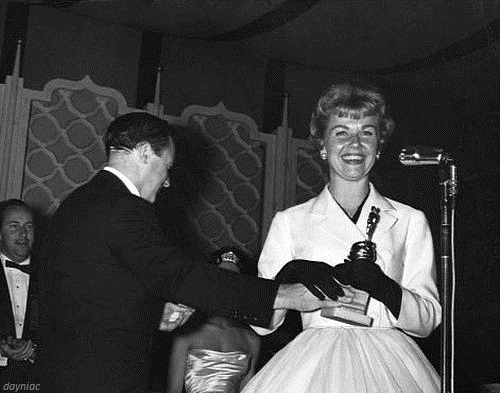 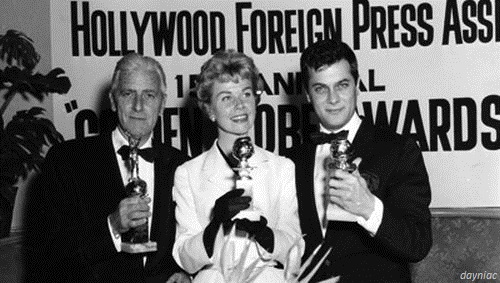 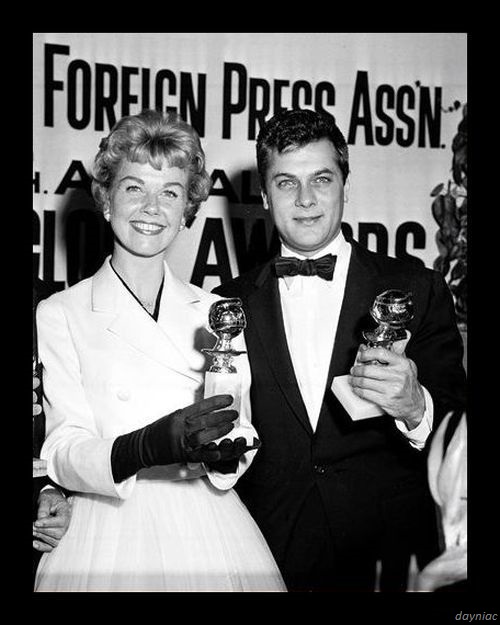 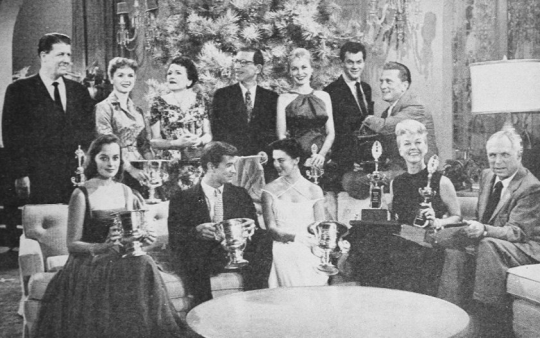 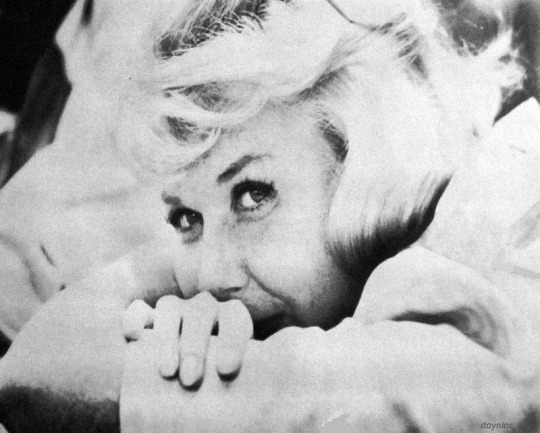 Thanks for all the really great picture. I had not seen the 1956 Modern Screen Awards photo. It is so interesting to see such great stars all in one photo.
I checked out the photo to identify everyone in the group.

Think about the conversations in that room. I wish Doris had worked on a picture directed by the great George Stevens.
Johnny
Top

Doris Day photographed by Bob Willoughby in her dressing room on the set of “Lover Come Back”, 1961. 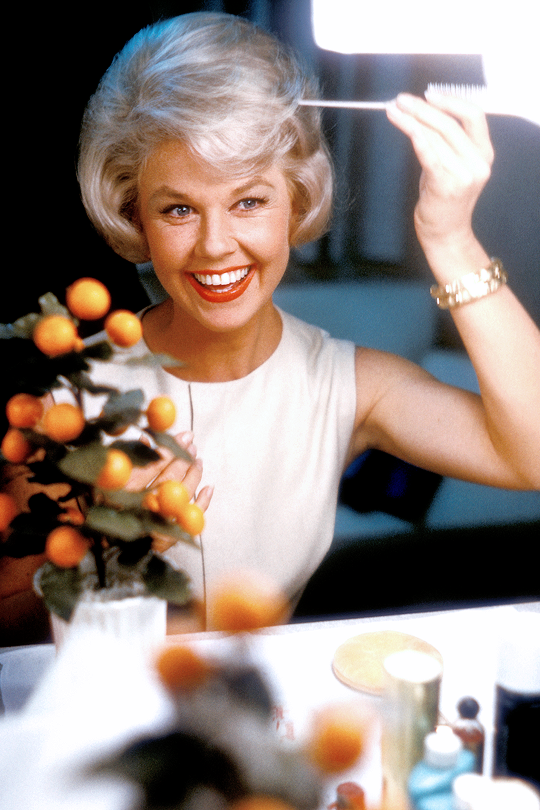 Nice photo by Bob Willoughby, Ania. He also shot the album covers of Doris for Show Time and for Bright & Shiny. Several books of his photography are still available, including The Star Makers, Hollywood: A Journey through the Stars, The Hollywood Special, and A Photographer's Journey through Hollywood.
Top

So many wonderful photos from Peter and Ania. Thank you both so much.

The one above is amazing in its quality. I've seen the shot before, but never with such clarity.

The Bob Willoughby photo of Doris is extraordinary. There is an exceptional warmth and radiance emanating from the light on Doris' face, hair and white dress.
Thank you.
Johnny
Top

Wonderful Doris-Rock pictures to warm a winter day. Thanks Peter.

Doris looks in this photo like she is singing The Sound of Music.
Johnny
Top

Great photo above, a lot of joy in Doris garden photo.

Thanks Peter!
The Tunnel of Love photo is new to me. Doris looks so sweet.

Doris' book jacket cover is one of my all-time favouite pictures of Doris. She looks so radiant and natural being photographed surrounded by nature.

Doris and husband, Marty Melcher at the press party on the set of "Eggroll," 1968:

Great photo's again. Although Lucky Me probably isn't the best film, it's a fun film and I think all players enjoying them self on screen. They all sparkle. 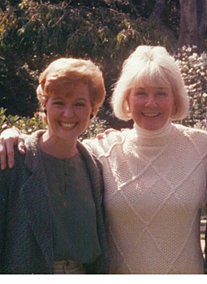 Cute photo with the elephant. Hadn't seen it before.
Top

The Pajama Game promotion photo of Doris is exceptionally beautiful. browsing through my pictures I came across this "fun" one with Doris's favourite hairdresser....her face says it all...
As we journey under our individual umbrella's,we should not forget we all share the same sky.Doris Day
Top

Oh Gertrude - you have a lot to answer for - lol!
Top 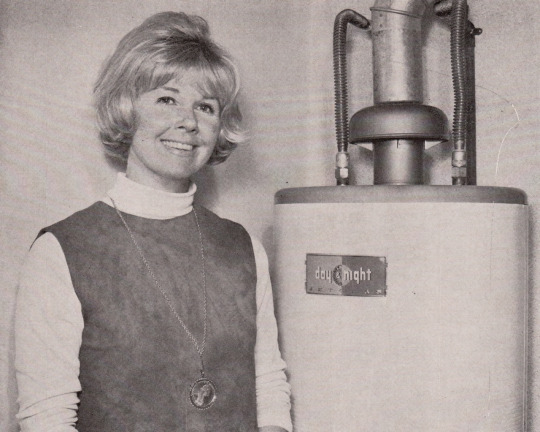 Another cute photo of Doris (there are SO many!). Thanks, Ania. I actually had a Day & Night water heater in the 1960s.
Top
Post Reply
606 posts