Thank you all, especially Peter, who found this great photo, it was a joy to color it. Thank you!
Top

It's a joy to open up the site, and see that beautiful, sunny smile. Thanks again Puck and Bryan!
Like Irene Dunne done.
Top

Hello Bryan and all my wonderful friends on this forum. I hope everyone is having a great 2017 so far. Bryan, i LOVE this gorgeous banner of Doris. She looks absolutely exquisite. I hope Doris is doing well as she approaches her 93rd birthday. Thank you so much for this exceptional Doris honoring forum.

Me too Tybear, glad forum back, couldn't get onto it all day yesterday.
Top

Thanks Tybear! I think 'honouring Doris' is a good way to describe the forum's aim. She certainly deserves it. Thank you!

Sorry Jas, the forum software is being updated (a regular occurrence). It's very technical, I think I could do it myself (in fact I finished off an incomplete update yesterday during the time you couldn't access it). But I outsource it to some people in eastern Europe and communication can be slow sometimes.

What a fun banner. Thanks, Bryan!
Like Irene Dunne done.
Top

Love it! I wish these two had worked together more (in addition to the one episode on DD's television series).
Top

Thank you for this wonderful Doris Day-John Gavin banner. I love the joyful look on Doris' face. I wish John Gavin had been cast in the Rex Harrison role of the husband in Midnight Lace. Doris and John make a striking, sophisticated and charming couple that looked perfect for each other. Rex Harrison looked too old for Doris to be her husband. His character lacked warmth and charm.

During that time period, John Gavin worked with Lana Turner in Imitation of Life, Janet Leigh in Psycho and Susan Hayward in Back Street. I think John Gavin needed more opportunities to broaden his acting roles and is under-appreciated for his work as an actor.
Thanks for giving him some recognition in the Doris Day banners.
Johnny
Top Having read a few books about Hitchcock, I was aware that John Gavin wasn't one of his favourite actors! Trying to find the quote Hitch made, I came across the following:

In Psycho, he played Janet Leigh's lover, but barely seemed to care when she was killed. On the set, director Alfred Hitchcock referred to Gavin as "the stiff" for his acting, but the more Hitchcock fumed, the more wooden Gavin's performance became.

In 1973 Gavin himself reflected (Wikipedia):

For a long time I wondered if I shouldn't have gone into something worthwhile, such as being a doctor. To the bitter end Spencer Tracy was also tortured with the same agony. I've only recently realized there's the actor in every human being – and to let it out, let it happen is a very wonderful, very giving thing. But I would have been so much happier in the past if I realized that sooner. You see, I would have relaxed.

Sam Stagg, author of a book on the making of The Imitation of Life was critical of Gavin's performance in that film and A Time to Love and a Time to Die:

In both films, Gavin is a foreign body: he slows them down like a virus that must run its course... What he did in this picture... he did in all the others – rather, it's what he didn't do: he didn't act with his face, his eyes, his voice, his body. He resembles a chiseled monolith and his facial muscles move as rarely as Nicole Kidman's... From the outset, critics have called Gavin "wooden". But that critical cliche tells only half. If heartthrobs like Rock Hudson were dreamboats, then Gavin is a glass bottom boat – in dry dock. His depthless transparency exposes his shortcomings... [Gavin was] eye candy... low-calorie but filling and incapable of stealing a scene."

Personally, I didn't notice too much about him in Midnight Lace - except he was trying to help Doris. I was probably too focused on her. In Psycho, I thought he was a believable lover for Janet Leigh. He doesn't demand attention in the few films of his I've seen but I'm not sure the roles called for it. I wouldn't condemn him in the way that Sam Stagg does. But it sounds like his heart wasn't fully in the acting business.
Follow Remembering Doris Day: https://twitter.com/DayRemembering
Top

Thank you Bryan for the Midnight Lace banners. I love the film Midnight Lace! I think Doris is a superb suspence actress (of course i think she is the best actress ever in any genre). Her performance in Midnight Lace was definitely award winning in my opinion. She is the very best of the best ever!

Fab banner- great to see Doris having fun during a difficult film. I agree John Gavin would have made more sense as the husband - he and Doris were sexy together, and even more so on her TV show.
Top

Thanks Jas & Tybear - the photos is a nice contrast to the more serious images we see from the film, isn't it?
Follow Remembering Doris Day: https://twitter.com/DayRemembering
Top

Have a Doris weekend (Bright & Shiny) everyone!

NOTE: If anyone is having problems viewing the forum (ie, the page is covered with small images that block out the text), it's down to a new software version update. Please clear your browser history (cache) - the last day will be enough - that will solve the problem and you can then view as normal - reload the page if it's open.
Follow Remembering Doris Day: https://twitter.com/DayRemembering
Top

Great banner, love the one with John Gavin, never saw that picture before. Really great.
Top

Something about this caught my eye - just posted by Peter in the photos section - thanks. 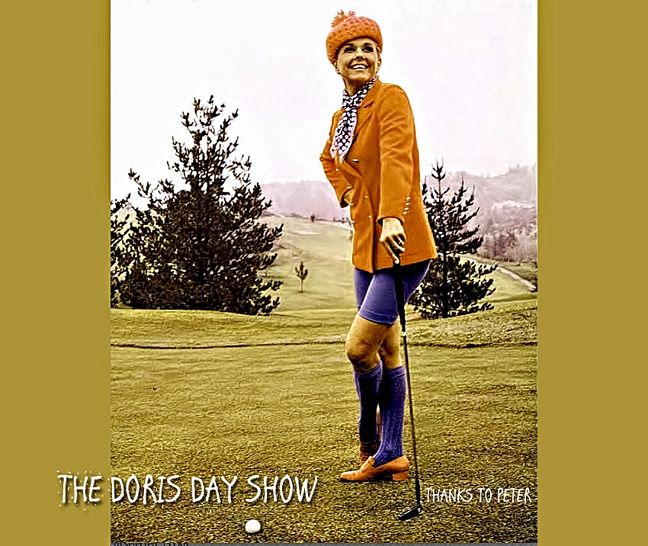 Fab banner- few could carry off this look, but by gosh, she did it!
Top

Thanks Bryan and Peter for this sporty Doris Day banner. The last time I remember seeing Doris on a golf course was in Send Me No Flowers. I love seeing Doris in the outdoors.
Johnny
Top

Very spiffy! Nobody ever looked better in shorts and knee socks.
Top

Users browsing this forum: No registered users and 15 guests