I can't see anything, Michael - I think you might have to be a 'friend' or send a friend request to view what she is sharing.
Follow Remembering Doris Day: https://twitter.com/DayRemembering
Top

I am a friend of hers on FB.

Try this link. I just tested it and worked for me.

This is what I got:


Sorry, this content isn't available at the moment
The link you followed may have expired, or the Page may only be visible to an audience that you aren't in.

I think you have to be a friend of hers to see it, Michael - but you could try downloading and putting it on your Google Drive.
Follow Remembering Doris Day: https://twitter.com/DayRemembering
Top

Wonderful to hear Doris's voice and to see these photos. Thanks, Bryan and Michael.
Top

Thanks for the photo's and Doris audio. Great to see!
Hope to hear/see some more

This past Wednesday, 9/27/17, I had a wonderful day in Cincinnati honoring a Wonderful Doris Day!!! Just being in Cincinnati, where Doris was born and where she spent her early years was an emotional experience for me. Afterall, I've been listening to her sing since I was four years old and first heard her on the radio. So, I have been a fan for 70+ years now.

As I was entering City Hall where all the festivies were to take place, I had to go through a security check. And, I set off an alarm. I had shoulder replacement surgery four years ago and there's now a piece of metal in my shoulder. It took a little explaining but the guards finally let me by. It's interesting to note that I broke my shoulder when I suffered a fall on April 3, 2013. Does anyone recognize that April 3 is the date DD was born?

I met Marion Collins, a delightful 98 year old sharp as a tack woman, who was in the car with Doris when the now infamous car/train accident occurred which greatly changed the direction of Doris' career. She told me that Doris was the only one in the car who sustained serious injuries. When I asked her where the accident occurred, she, without hesitating, told me that it was at 5th and High Streets in Hamilton, OH, which is like a suburb of Cincinnati. She went on to say that it had been the site of many accidents and as a result, the city changed the intersection such that you no longer cross the railroad tracks by car. If you google this intersection, you can see what she meant in the street view. Marion thanked me for coming and told me that she was happy to meet me. I was impressed and happy to meet her too.

I also met Kimberly Mussell who, along with Marion Collins, is pictured in a post above this in "Banners." Kim told me that she is from Columbus, OH. Notice the tee shirt she's wearing. It really caught my eye and I want one. She said that they are made by a man in Columbus who, like her, is also a devoted DD fan. I gave her my contact information and she said she would let me know how to contact the tee shirt man who she doesn't believe has his own website.

I introduced myself to Lea Price from the Doris Day Animal Foundation. The minute I finished saying my name and that I'm from Indianapolis, she smiled and said that she knows who I am in that she has seen my name on various correspondence and other contacts I have had with the foundation. It felt good to hear that. We also talked some about the great work the foundation has done and continues to do.

And, last but not least, I met and talked with Dr.Robert Maltz, a native Cincinnatian, who has been, like me, a Doris Day fan for life, almost. He was instrumental in arranging this celebration of Doris. It was so nice to meet someone whose enthusiasm for all things Doris Day is on a par with mine.

In the city council chamber we saw a video highlighting Doris' career, listened to an audio message from Doris, heard Lea read a letter from Doris and heard remarks from Dr. Maltz. And, of course, we witnessed the city council approving the street name of Doris Day Way and declaring September 27 as Doris Day Day.

A large group picture of all attendees was taken with someone in the front row holding the street sign. I have to admit that I felt tempted to grab the sign and run, and bring it home with me, but I behaved myself. I don't know where this photo will wind up. Possibly on the city's website or in the Cincinnati Enquirer.

When the ceremonies were over, my friend and I went to see Doris' home and the surrounding neighborhood. It's very close to downtown. I have pictures but they're in my friend's phone (long story) and I'll post them when I get them. It's kind of hard to explain but I again became emotional being there. In my mind I was picturing a young Doris out playing, going to school and church, etc. It was a good feeling.

Thank you for that excellent report, Renie. I almost felt I was there. It was a real pleasure to read and if any other thoughts about the day come to you, I'm sure everyone would like to hear them.

Has Marion had any contact with Doris? I'm sure Doris will be told that she was there.

Bryan: Thanks for your very kind comments. I had intended to ask Marion if she was in contact with Doris but I forgot to do so.

Peter: Thanks for finding that article about Doris' accident. There are two things in it that jumped out at me. One is that Marion's memory as to the location of the accident was absolutely correct. The other thing that I think is new information is another Cincinnati address for Doris, 5963 Home City Ave. I haven't come across this one before.

Thank you for the detailed summary of your day in Cincinnati. Your heartwarming account made me feel so good. It's comforting to know that people can still work together and do the right thing by honoring someone like Doris Day. Her place in history feels more secure now that her name will always be visible in her hometown.

I hope Doris is in touch with the amazing Marian Collins. Her vivid recollections made all of this that much sweeter.

A very nice account, Renie. So glad you were able to attend the festivities!
Top

Thank you so much Renie for sharing your wonderful adventure at the Doris Day celebration in Cincinnati.
Johnny
Top

Thanks for your report on Doris Day Day. Loved to be there with you!

Thanks Renie for the fabulous update.
Top

Thanks to all of you for your comments and "pats on the back" so to speak. I had no idea that this trip and the ceremony were going to affect me so deeply, but they did. I'm very glad I was able to be there and share it with you.

After I got home, I realized that someone else was there that I wished I had talked with but I missed him. He was a relative of Barney Rapp, his son-in-law I think. If not for Barney Rapp, I wonder what Doris' last name would be now. How about Barney Rapp with his band's songstress, Doris Kapp?

Or if the song had been 'Night and Day' and he suggested Doris Night?

It looked like a small (intimate?) gathering for a one-time superstar. Ideally, it should have been on April 3rd, or in summer, with lots more planning and months advance notice. Really, it wasn't clear what was going on until a week or so before. Someone, I won't mention his name (Michael!

) wasn't convinced until the last moment. And there was also the ambivalence of the council having to vote on it on the day of the event. Maybe a future Doris Day Day in Cincinnati will be a bigger, more celebratory event (I didn't like the choice of 'The Man Who Knew Too Much' for a film showing - far too heavy for a Doris Day Day). But, obviously, I'm very happy they honored her in this way (Way?)
Follow Remembering Doris Day: https://twitter.com/DayRemembering
Top

This was a City of Cincinnati sponsored event and it was up to them to publicize it. Doris’ PR guy, Charley Walters, was not involved from what I can tell; therefore, there was no coverage on any of the major media outlets. This was not the case when she celebrated her “90”th birthday or when she released the “My Heart” CD. Doris didn’t acknowledge it until two weeks before the date when her team announced it on her website. That wasn’t sufficient time for many fans to make travel plans, but fortunately, a few like Renie and Kimberley were able to be there. Still, the turnout was smaller than hoped for and I didn’t see any media coverage except for a couple articles that appeared right before the event. Considering her stature in film, television and recordings, general awareness among the public was scarce to say the least. I find that disappointing but I commend the efforts of Bob Maltz, the city councilmen, and everyone else who helped make this happen. And from what I have seen, it was a lovely event with members of the DDAF there to represent Doris.

You're right there, Michael. 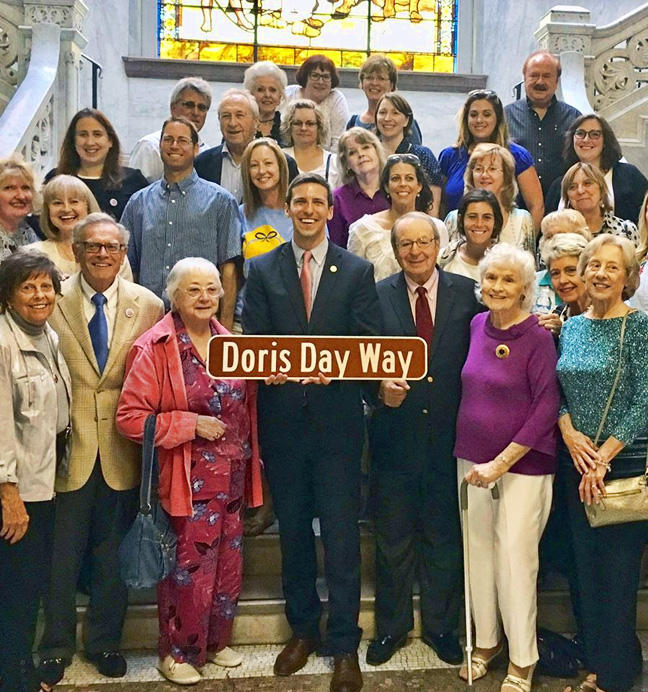 Thank you for posting the photo Bryan - I must say there were MORE people in attendance than are in the photo - this photo was taken awhile after the vote, etc. People were chatting in the hallway and after several people were taking pictures with the DORIS DAY WAY sign, finally a photographer from P. G. Sittenfeld's office came out and took this 'group' shot. WHile I agree, it would have been nice to have hundreds of people swarming around for this glorious day, it was what it was - we enjoyed honoring the great DORIS DAY. More stories will be coming out....
Thanks for ALL you do.
Mary ANne
"The BEST is yet to come."
Top

Everyone looks happy anyway - it must have been a great Day!

Gothic Doris. It reminds me of the film Gaslight, with Ingrid Bergman: I love the beautiful banners and all the information about Doris Day Day. What a great tribute and a wonderful way to honor our Doris. I'm sure it was exciting to be a part of this beautiful experience. Doris so deserves this and more. I have missed participating on the forum. Hopefully things are beginning to calm down and I can get back to what i love. Thank you Bryan and all my forum friends. I hope Doris is well. Have a wonderful week.

Thanks, Tybear, we've been missing you too - and your always-positive input and love of all things Doris.

The main thing is that you keep in touch and let us hear more from you when you have the time.

Users browsing this forum: No registered users and 11 guests