Thanks to Howard and Bryan for the Barbra-Doris guest banner. There is a certain majesty in the mauve - blue colours and design.

I wonder if Doris and Barbra ever met.
Johnny
Top

A great banner! It really captures the iconic stature of both ladies, who are vastly different in their vocal styles and backgrounds yet among the top female recording artists of all-time.

Thanks, guys! Back to Send Me No Flowers:

THE HILARITY IS CONTAGIOUS

"Doris Day and Rock Hudson's final film together is an adaptation of a short-lived Broadway comedy about a high-strung hypochondriac (Hudson) and his skeptical but patient wife (Day). George and Judy Kimball dwell in a sunny, early-1960s suburb, complete with a gossipy milkman, leering delivery boys and the requisite nutty neighbor (Tony Randall). While George lives in fear of nearly everything -- this may well be the first time movie audiences heard jokes about cholesterol -- Judy laughs off his paranoia, until a mix-up at the doctor's office convinces George that his time is nearly up, and he becomes determined to find a new husband for Judy before it's too late."

"In contrast to PILLOW TALK and LOVER COME BACK, FLOWERS presents Day and Hudson as the picture of domestic bliss -- at least until the kooky complications start piling up. Director Norman Jewison, who had worked with Day on THE THRILL OF IT ALL the previous year, brings a winningly breezy touch to this lively farce, providing both of the stars with numerous opportunities to show off their comedic skills (Day is particularly fine in an early scene in which she finds herself locked out of the house). The exceptionally strong supporting cast includes Clint Walker as Judy's too-good-to-be-true college boyfriend, Edward Andrews as George's long-suffering physician and Paul Lynde in a stand-out bit as a disturbingly enthusiastic cemetery plot salesman. And don't miss Doris singing the bouncy title track, written by Burt Bacharach and Hal David: How 1964 can you get, we ask you?"

Thanks Bryan for this very funny Doris Send Me No Flowers banner.

Thank you also for the accompanying commentary.

I love the rich and warm colour palette of the costumes and sets in Send Me No Flowers. They add so much good feeling to the film.
Johnny
Top

Thanks, Johnny, it is a funny banner, isn't it?

Not sure if we've finished with Send Me No Flowers?

"Doris Day who became one of the worlds most beloved comedians pioneered her way through a myriad of productions where she demonstrated the fine art of physical comedy. By 1959 when she commenced her three-film collaboration with Rock Hudson, Day had explored almost every facet of the comedy genre and succeeded on all avenues.

Rock Hudson was just as adept at comedy, and after completing Pillow Talk their first film together, audiences were enraptured by his jocular aura and the undeniable chemistry with Doris Day that they campaigned for the couple to star in more movies together.

When delving into the filmography of Doris Day to examine all the variations of comedy, Send Me No Flowers is one film that really encapsulates the physicality attributes of the genre.

Superbly directed by Norman Jewison, and written for the screen by Julius J Epstein, Send Me No Flowers marks the final onscreen pairing of Doris Day and Rock Hudson....... 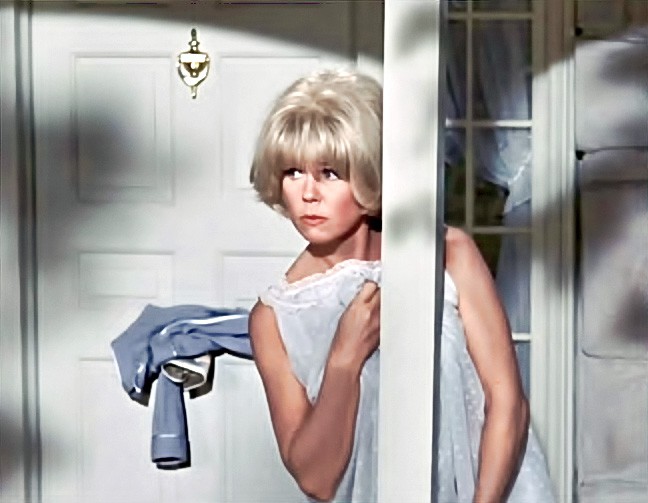 "As the film progresses, the comedy gets frothier. Another interesting scene that epitomizes physical comedy is when Judy pushes George out the door in his wheelchair after discovering that he’s not really dying. Leading up to this moment in the film is perhaps the funniest sight gag in the whole production. Before pushing George out the door, Judy walks over to the bed where George is sleeping and delivers a hard slap on his face, which startles him. The dialogue that follows is very acute and witty at the same time.

Without delving into every sequence, the film also contains a crisp script abounded with sharp and snappy dialogue that will get the viewer laughing.

From the lush technicolor to the exquisite sets and wardrobes, Send Me No Flowers is the perfect film to watch when you're in the need of some laughter medicine."

Puck and Bryan, LOVE the new banner!!!!
"The BEST is yet to come."
Top

Where are the great film comedies today filled with snappy dialogue and sophistication like the films, Doris Rock and Tony made? How I miss the fun and sweet humanity.
Johnny
Top

Thanks, MA & Johnny, yep, I can't see anything resembling these kinds of romantic comedies being made today.
Film energy is different and more serious in these areas. At least these kinds of films are shown at special screenings.

These graphics are great fun. I've always thought the posters for Doris' comedies were well done. Love the coloring by Puck too.

To Johnny's point about today's comedies, I say that vulgarity, gross-out humor and meanness have supplanted wit, innuendo and sophistication. Without doing any homework on this, I trace the downfall back to the Farrrelly Brothers and There's Something About Mary. From then on, mainstream comedies were in a competition to see who could be the most profane, crass and vulgar. OK - so I'm a bit of a prude - I admit it. Yet it escapes me why so many people enjoy watching name actors degrade themselves by participating in disgusting scenes involving bodily functions and other things that are best left to the imagination. I don't object to nudity, sex or violence on screen if it's tastefully done and not thrown in for shock value or to get a cheap laugh. I wonder if today's audiences have the attention span to appreciate great dialog and a literate screenplay. Words don't seem to matter anymore. What's next - a film starring emojis?

The last film I saw that came close to the old screwball style of comedy was Game Night with Jason Bateman and Rachel McAdams. It was R rated but the naughty bits were stylishly done and the script was intelligent. Both Bateman and McAdams were terrific in their parts (especially McAdams, who really let loose) and the supporting cast was equally adept. It wasn't a perfect comedy by any means but it was clever and it boasted some sharp dialog and characters who had some depth.

Thanks to Bryan and Puck for this Send Me No Flowers banner that exudes joy. Doris and Rock generate so much good feeling in a simple, inviting, classic way.
Johnny
Top

To me, Michael is so correct on every point. Laughter is a great tonic, and I miss the witty dialogue, class, and truly funny situations that were hallmarks of Doris's most successful comedies. Sigh. Good thing we have DVDs of her movies and others' to watch.
Top

I think this is a perfect time to add to Musiclover, Michael and Bryan's important and insightful observations on film comedies and express my deeply felt appreciation for this Doris Day Forum which is genuinely enlightening and so enjoyable. It is like a trip down the yellow brick road encountering new perspectives and ideas on film, music , history and surprising trivia gems. Most importantly, we can express our heartfelt admiration for the many talents of Doris Day who represents the best in entertainment history.
Johnny
Top

Johnny, thanks to you for bringing your enthusiasm and positive attitude to the forum. You are also great with introducing new topics for discussion. Bravo!

I second that, Michael - and you're pretty good at keeping the forum going yourself!

Does anyone know which post has the link to sign Doris' birthday card? I saw it a few days ago.
Thank you.
Johnny
Top

I think that this is the link, Johnnie, from the DDAL website:

This new Doris Send Me No Flowers banner is fun and saucy. The blue dramatic tones give it a quirky interest. Thank you Bryan.
Johnny
Top

I think we've 'gone about as fer as we can go' on Send Me No Flowers and we're all probably thinking about a coming event anyway. Here's a photo of Doris having a birthday celebration in the 1950s (looks like) taken by Mary Anne, who was presumably working for her at the time. Perhaps she can tell us the date and what was going on?

I love the banner.
Top

Thank you Bryan and Mary Anne for this beautiful Doris birthday banner.

I wonder what kind of delicious cake Doris is having. Looks so good!
Johnny
Top

Doris is the gift that keeps on giving.

Lovely banner and a great choice to launch the official birthday celebration.

The banner is great! Thanks Mary Anne and Bryan!
Like Irene Dunne done.
Top

Love the banner Bryan - I got the photo from Doris, but NO, I did not take it - this was a little before my time with Doris - looks like early 1960s judging by her hair style. I was with her in the late 1960s and into the mid 1970s. Will send you a copy of the photo I took of Doris for the surprise birthday party we gave her. April 3rd will always be a special day for me because of Doris. We are so lucky she is still with us and enjoying life. God bless Doris!!!! Don't know how to attach a photo to this entry, but will send it to you Bryan so you can post.
Anxious to hear about all the exciting events coming up in Carmel this weekend. Happy Birthday dear Doris!!!!