The Doris Day Web Forum - an unofficial forum for fans of Doris Day.
Forum rules
Treat others as you would like to be treated.
Post Reply
First unread post • 131 posts

This hit me harder than I thought. Never met her, but she was always a beacon of hope and optimism and symbol what you can do if you just smile, persevere, and try to enjoy every day. She is hands down my favorite actress. Maybe more because of the qualities that she possessed that translated across the screen in any part she played. The pluck, warmth and optimism are always present. I am sad because she is not around on earth, but she has such a warm and endearing legacy that continues. I think that offers some comfort. What a wonderful, kind lady.
Top

As i sit here all teary eyed, I find it hard to express just how much Doris Day has meant to me. Sure, she was a great singer, one of the best, a wonderful actress - criminally underrated - as many have said, and it’s probably true -she made it look too easy. But she was more than that … I, like so many others have said the same thing - Doris Day makes me happy. There’s just something about her - her positivity, her warm, welcoming smile, her infectious personality just made life seem a little bit brighter. And what a legacy she leaves behind - she has made the world a better place for people by sharing her talent and for our animal friends through the wonderful Doris Day Animal Foundation. We won’t see the likes of Doris Day again, but we still have her great recordings. and her terrific films to be cherished for all time. I will miss her forever.
Like Irene Dunne done.
Top

Doris said years ago that she would "work until the day I die to make things better for animals," and she really kept her word. Besides her tireless advocacy of animal welfare, and even more than her multi-faceted talent, what I've always admired was just the lady herself -- a class act who lived her life with an unabashedly grateful heart and who exemplified good humor, grace, and humility. What an unsurpassed legacy she has left to all of us in so many ways! Amidst this temporary sadness, that legacy is surely cause for celebration. Deep in her soul, I hope Doris knew that (as lyricist Sammy Cahn wrote for her) we'll Never Stop Loving You. I'm sure that the gates of heaven have already opened wide for her!
Top

There are no words to describe the sadness we all feel for the loss of Miss Doris Day. She will always live in our hearts, and although she is no longer with us, her legacy will live on. And so will our love always for such a wonderful fellow being. Texas Gonzalo
Top

First day knowing Doris is no longer with us- feeling all the pain and sadness - "this too shall pass."
Ania - sorry to hear about your mother as well - sorry for your loss.
Top

Tributes from some Hollywood stars including what appears to be a recent photo with Stella McCartney.

Today, the reality is setting in. I'm feeling really down today.

TCM will air a 24 hour tribute to Doris on June 9th.

Thanks Michael - yes, I loved the pic with Stella McCartney - either from last year or the year before I think????


The more I think of it - the more positive I become- what a life Doris had - and she stayed so healthy to [almost] the end- she didn't suffer- that is something to be so grateful for - and apart from a brief stay in hospital - she died in her beautiful home surrounded by friend /family/ furry babies.

An interesting twitter entry from Mamie Van Doren - expressing devastation at Doris' death saying she had recently sent her birthday wishes- I am not criticising Mamie for what she said in her book but obviously she has changed her mind over the years about our fabulous DD. Interesting though.

Lovely to read all the celebrity comments. Has anyone seen anything from Doris' television son - I can't recall his name just now?
Top


Barbara Hershey
✔
@BarbaraHershey8
My first film was Doris Day’s last one. She had grace, class and was a beautiful human. I wish my 19 year-old self knew enough to talk with her about her love of animals, which i share more and more as time goes on.

115 people are talking about this

So glad I ordered the tshirt from the foundation. I will wear it with pride. It was a dreary day in DC yesterday but as I listened to Latin for Lovers, the sun came out!
Top

A wonderful appreciation that does her justice.

Thanks for that Michael - it is indeed a great appreciation and a [somewhat] fresh take on things - concentrating solely on Doris' work and legacy on film and in culture.
Top

Michael, that piece by Hal Rubenstein is the best one I've seen. Thanks so much for sharing it.
Top

Thank you for collection all these tributes and telling your personal stories. I hope that we can continue for a while. But if not, feel free to contact me. My English isn't the best, but if you need a chat or post on Doris... DO SO!!!

I've had a very busy day today - only recently got home. Doris is on the cover of almost all of the UK newspapers, all unqualified tributes, and an outpouring of affection, which is gratifying.

I've bought a couple and saved online images of many other front pages, will have a bit more time to post tomorrow.
Follow Remembering Doris Day: https://twitter.com/DayRemembering
Top

I just hope that our forum will continue to work ... That no one will forget about our beloved Doris, that she will always be in our hearts... Such a forum in memory of Doris...

Someone of you is going to a funeral? He can light a candle from me for Doris?
I LOVE YOU DORIS♥

ELTON JOHN - When I was 6 years old, my Mum agreed to buy me a record in exchange for having my tooth pulled at the dentist in Northwood Hills. I chose Doris Day’s recording of Secret Love/The Deadwood Stage. I loved her music, and I still do today. Farewell to a Hollywood legend. #DorisDay #RIP

K.D. LANG - “One of my all time favorite singers.

MARY QUANT - (Fashion designer) - “Doris Day was America. Doris Day was everything that was wonderful about America. She was all woman, as well as being the girl next door. She had it all.”

MICHAEL FEINSTEIN - “There are moments in life that you cherish forever. Singing to #DorisDay for her 97th b’day was one of those moments. Doris lived a life full of highs and lows, but always with love exuding from her heart. God bless you Doris. You were a beacon of talent, beauty, grace, and love.”

ELAINE PAGE - One of my all time favourite stars has joined the heavenly choir. Rest in Peace the great & inimitable Doris Day. The last star of the Hollywood Golden Age. We'll bid you farewell by the Light of The Silvery Moon, but you will always be Young at Heart to us forever.  
Like Irene Dunne done.
Top

It is of course a sad time for all DD fans but I am sure Doris wanted no sadness just as she wanted no funeral, no memorial and no grave marker, Doris would never want to be a focal point of sadness, she would want people to remember the smiles and happiness she brought into so many lives both two and four legged, there can be no better tribute to Doris than to break into a sunny smile for that's what she was and always will be all about, bringing a ray of sunshine in a sometimes all too gloomy world and that she did like no one else.
Top

It is lovely to hear from Elton, K.D. Lang and other celebrities That admired her.

I saw glowing posts on Twitter from Carl Reiner and Goldie Hawn.

Thank you to Bryan, Ania, Michael, Peter , Musiclover and all forum members for all the comforting posts.
Johnny
Top

You may want to read my latest blog about Doris. God bless her!!!

Mary Anne, I think The BEST has already been!

As promised just some of the UK front pages yesterday, all indicating articles inside. The UK press is notorious for its treatment of celebrities so it's a rare thing for such united praise and respect.

In Parliament, at Prime Ministers Questions today, the Leader of the Opposition, Jeremy Corbyn, said
"I think it's only right that the House of Commons pays tribute to a leading Holywood icon and campaigner for animal rights, Doris Day. who passed away this week. I'm tempted to quote some Doris Day songs, but I won't." (cheers and laughter). "Alright, Whip Crack Away!" More laughter and singing noise. Jeremy Corbyn. "I'm sorry, Mr. Speaker I seem to have started a sing-along here!"
Theresa May responded, "I'm sure many people across the House would like to recognise the passing of someone who has given many hours of entertainment through her films and career, Doris Day". 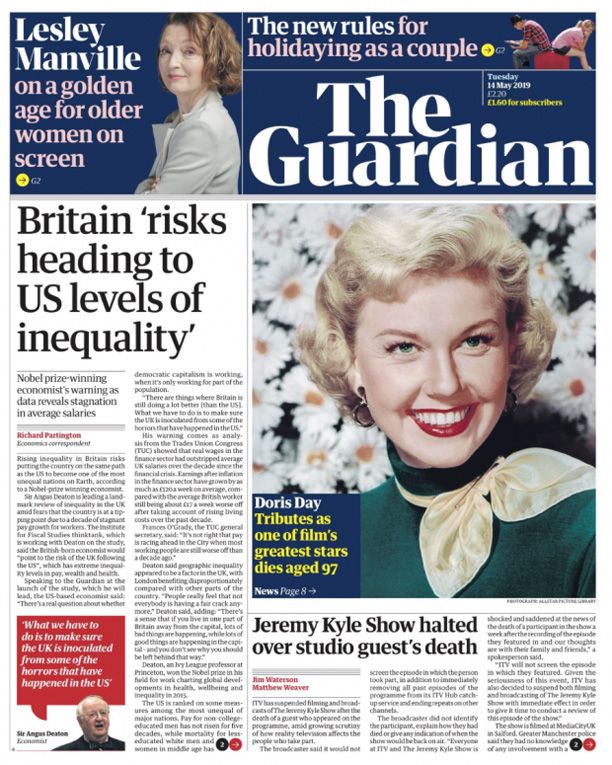 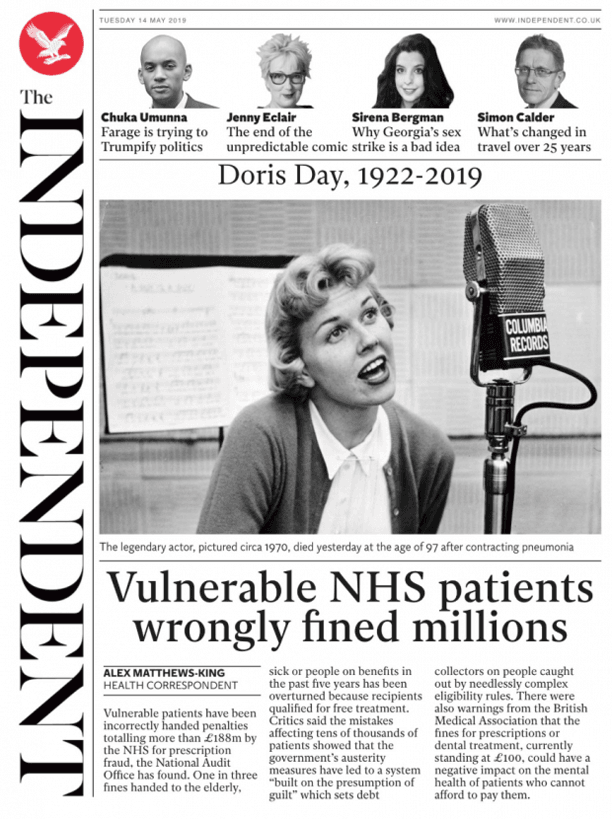 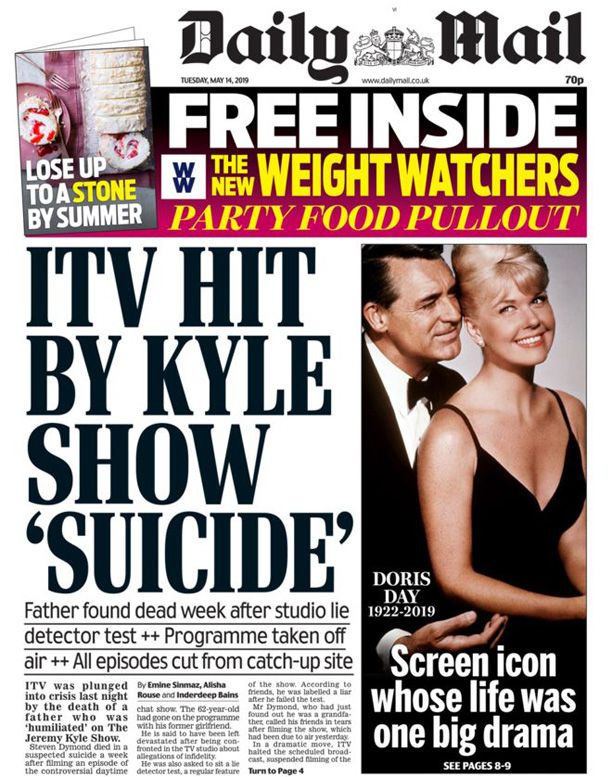 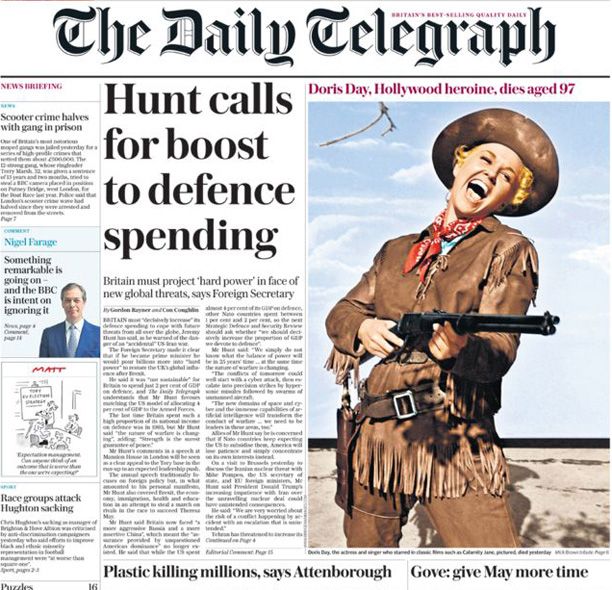 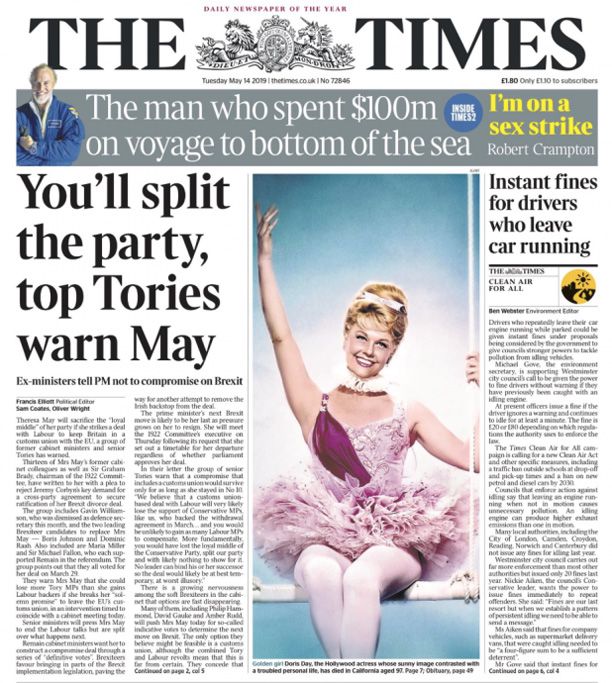 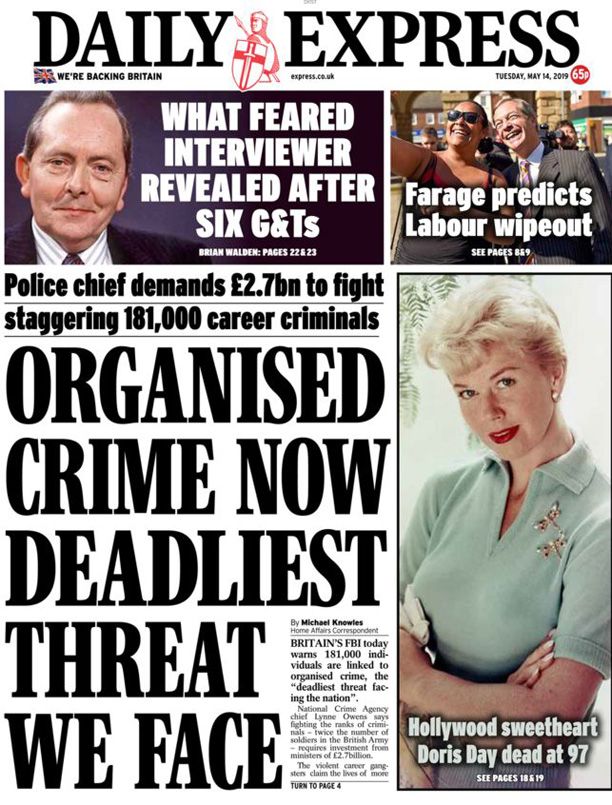 Thanks for posting those front pages, Bryan. The American press was quite kind, as well. In the L.A. Times Calendar section, they devoted three whole pages to DD. Plus an official obituary in another section. I'm having problems posting photos lately. Otherwise I would have been happy to share.

Mary Anne - thanks for your nice posting.
Like Irene Dunne done.
Top

Thank you again for sharing your story's and article's. 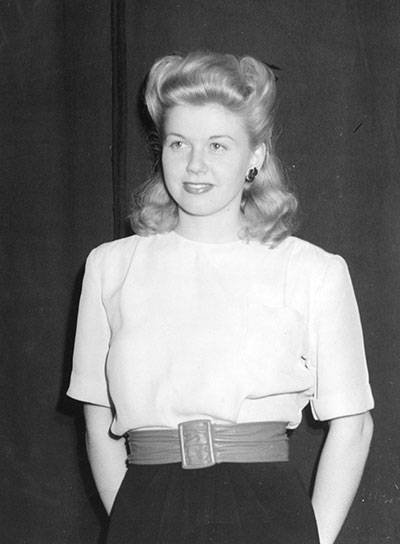