Lucky Me was the first musical to be shot in CinemaScope. It was also a picture that Doris Day, Hollywood’s Golden Girl, did not want to make. Because of contractual obligations she decided to do it and gave 100% to the role of Candy Williams.

Her co-star was Robert Cummings, long-time Hollywood leading man and television star. In support, she had Phil Silvers, Nancy Walker, and Eddie Foy, Jr. It was reported that Martha Hyer, a blonde, was forced to change her hair color to red so as not to conflict with the star, Miss Day. This film is famous for another reason. Judy Garland was on the Warner Brothers lot filming A Star is Born. She and Miss Day visited each other’s sets and became friends. Doris Day’s opening number in Lucky Me, The Superstition Song,

Lucky Me is a fun musical which opens with Doris Day’s dynamite opening number, The Superstition Song, which she sings while bouncing down the streets of Miami! A true star performance! Only Doris could have gotten away with this and she is brilliant. She played Candy Williams, a singer-actress who was appearing in a traveling show, Parisian Pretties, which bombed in Miami. Stranded, she meets a New York songwriter, Cummings, who is casting a new Broadway show. Not wanting to be recognized as a famous songwriter, he pretends to be a car mechanic after she mistakes him for one. However, he soon falls in love with her and despite attempts to tell her who he really is, she finds out first and refuses to speak to him. During the proceedings, Doris Day sings most of the numbers including her chart hit, I Speak to the Stars. The highlights are I Wanna Sing Like an Angel and Love You, Dearly, a lovely ballad, which should have been a hit. Bob Cummings, Doris Day, Phil Silvers on the set of Lucky Me.

Phil Silvers was wonderful and had a great number with Doris Day called Men! The other actors gave Miss Day strong support and everyone seems to work well together. Angie Dickinson made her film début in a walk-on scene at the big party, but you probably won’t recognize her (she had black hair). Bill Goodwin played the same role he played in many a film at various studios.

Again, Doris Day fans will just love seeing their favorite star do anything. Even though Miss Day didn’t like the picture, her fans seem to love every minute of it. I must admit, I liked it!

Doris Day is a trouper, having done it so many times before, but she has a good following, and she sells her songs with skill sufficient to make anybody, however bored with the basic idea, stop, look and listen to the familiar routines. And none will be unhappy about the treatment she gives the stuffy situations.” – Box Office Magazine Lucky for us, it stars Doris Day!

Lucky Me was the penultimate film under Doris Day’s Warner Brothers contract – Young at Heart being her last. Although she stated that she didn’t believe in the project, you’d not know it while watching her performance.

While far from the best film made during her seven years on the Burbank lot, Miss Day is a delight. In Technicolor and widescreen (The first musical to be so filmed), she looks a treat. Her performance is filled with spunk, vitality, exuberance and that unmistakable Doris Day glow that never seems forced or contrived. From the first moment we see her bouncing down the street letting loose with The Superstition Song, we are sold. There’s not a false moment in her performance. Her comic skills are given a chance to delight us, even if the script might not be as fresh as we might like. Vocally, she runs the gamut from the lovely, I Speak to the Stars, to The Bluebells of Broadway. She gives every song the full treatment, again dispelling any displeasure she might have personally felt about this picture. 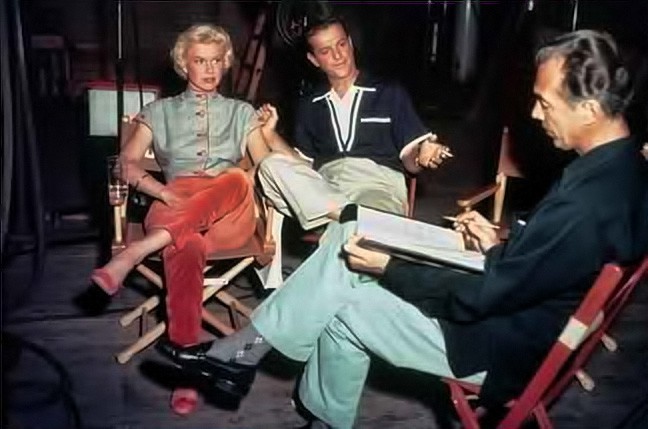 Doris and Robert Cummings working on the script for Lucky Me. – heckyeahdorisday

The cast works well together. Bob Cummings gives the same kind of smooth performance he gave opposite another blonde star, Betty Grable, a decade or so earlier. He seems ageless. Phil Silvers shows he can play more than Sgt Bilko, and Nancy Walker, years before she started selling paper towels, reminds us of her musical-comedy roots. Eddie Foy, Jr, is amusing and Martha Hyer, who later married famed producer Hal Wallis and wrote (uncredited) the screenplay for the 1975 teaming of John Wayne and Katharine Hepburn, Rooster Cogburn (and the Lady, is good as the spoiled little rich girl.

The plot about a troupe of down on their luck performers is not new. Since the inception of sound, it has been done by virtually every performer – male and female. This version doesn’t add a lot of new twists. However, the cast play their parts with such conviction, you find yourself smiling at their antics and tapping your feet to the catchy songs.

Lucky Me didn’t break box-office records when it was released, but it deserves a better reputation than it has earned through the years. Thanks to Doris and company, the film is a lucky break for viewers!

Doris Day reported at the time of the film that as an actress she had to work at keeping in shape. Some actresses would have to attend gym classes between pictures to keep in condition. But as it was, she had an energetic young son to keep her in trim by bouncing volleyballs in her face, beating her at tennis, and racing her to first base. “I suppose I should be very grateful to Terry for keeping me in shape!”, Doris said.

Doris Day and Barbra Streisand: the photo above is from the Lucky Me soundstage in 1954, the one below, used by Barbra Streisand on For Pete’s Sake in 1974, is the same Warner Brothers backlot some 20 years apart. The box office is the same, repainted and moved back. Thanks to Barbra Memories.

It was reported that using the new CinemaScope camera for the production helped keep all the dancers and singers in full-length close-ups. The CinemaScope camera could be placed only 30 feet away while an ordinary camera would have to be 50 feet away in order to get the whole troupe in. This is another major reason why CinemaScope movies sometimes seem so distorted or awkward in their close-ups. Doris Day had a beautiful wardrobe for this film and seldom looked lovelier, nor has her voice ever sounded better. Doris, herself, remembers little of the film. She felt she had only one good song, I Speak to the Stars, but reported in her book that she was not feeling up to full vitality during production.

She initially questioned the wisdom of doing the film at all until Martin Melcher reminded her that the studio was counting on her to do her best. And she agreed fully. And she was a perfect trouper. Her dynamic spirit and bubbly personality came through completely.

There were some pictures I performed in that I didn’t like at all. I couldn’t sit through them for any amount of money. But many people have been entertained by them and don’t share my feelings. So there it is again – nothing is good or bad.”