Doris Day was now a top 10 box-office star and received top billing in The Winning Team but she clearly was not the star of this 1952 film; Ronald Reagan was.  The picture is a highly fictionalized depiction of the career of Hall of Fame pitching great. Grover Cleveland Alexander.  In it, Alex (Reagan) is a telephone linesman who aspires to become a professional baseball player.  His ambition to pursue this career is strong, and he finally receives an offer to play with a minor league team.  He is offered a whopping $100 per month, which does not impress his fiancée, Amy (Day), who wants him to get serious about marriage and forget about what seems to be an unattainable goal. Alex, however, joins the team and his expert pitching helps it to start winning games nationwide.  During a game, he is accidentally struck in the head by a baseball and his injury results in a condition called diplopia, or double vision.  Unable to continue playing, he marries Amy and tries to become a farmer, but baseball is always on his mind.  Even though he still sees two of everything and his career is apparently over, Alex keeps practicing his pitching.  He gradually sinks into deep depression, though, feeling that playing baseball again will be impossible. 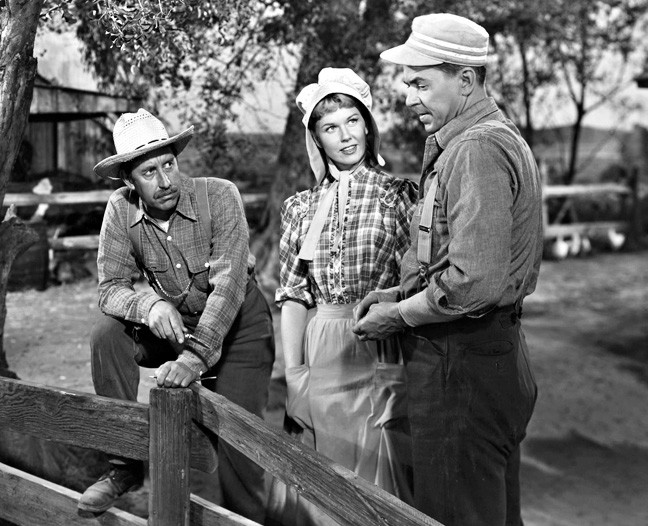 After collapsing on the baseball diamond, Alex is advised by a doctor to retire and return to farming.

Suddenly his vision seems to have been miraculously restored, and Amy joins him on road trips as he resumes playing, this time with the then Philadelphia Nationals.  Great success follows and in 1917, Alex signs with the Chicago Cubs.  Almost simultaneously, he is drafted to serve in the military in World War I.  After the war, his diplopia returns, but this time it is accompanied by memory loss and fainting.  After collapsing on the baseball diamond, he is advised by a doctor to retire and return to farming.  Alex does not reveal the diagnosis, even to Amy.

Depressed again, Alex hits the bottle to combat his anxiety and panic attacks. He gets in trouble with the law, gains a reputation as a drunk, and is dropped by the Cubs.  Because of his celebrity, he is hired by a succession of minor league teams.  Finally, however, none will take a chance on this has-been.  Alex, desperate for money, then disappears.  By this time Amy has left him – but, after being told the truth by Alex’s doctor, she sets out to find him and discovers him working in a tacky carnival as a sideshow attraction. Amy implores old friend and former player, now manager, Rogers Hornsby (the always reliable Frank Lovejoy), to give Alex a job with his St. Louis Cardinals. Amazingly, Alex’s pitching is so good that the team eventually wins its first-ever National League pennant in 1926.  The World Series that year between the New York Yankees and the Cardinals is filled with suspense.  Even though the Yankees are favorites to win, Alex strikes out most of the Yankee players, including Babe Ruth in the first game, and ultimately wins the series for the Cardinals. With I’ll String Along With You as a recurring background musical theme throughout the picture, the melody lends a sentimental feeling to the film. Reagan, at age 41 when filming began, was a bit mature to play the part of Alex in his twenties. His performance is good, however, and he conveys the drive that one must have to be a successful baseball player. Day, on the other hand, was just right age-wise in this thankless role. She is light at the beginning but grows stronger as the story progresses.

The production is adequate and Lewis Seiler’s direction is pedestrian. Amy Alexander was an advisor on the film and, as baseball movies go, this one has some punch.  Fans of the game will enjoy the actual film snippets of the ’26 World Series. The Winning Team is a somewhat different version of the story of Alex the Great from the one that was solemnly published in his obituaries two years before. In the first place, there was no mention of that damaging clonk on the head that is alleged to have caused those mysterious fainting spells. The story, generally accepted, was that Alex was inclined to indulge rather freely in ‘strong waters’ and this caused him to lose his balance sometimes.

Also, the story that Alex was out of baseball for a spell, knocking around with a bad reputation, that does not show on the record books. His decline into straitened circumstances – the carnivals and such – came at the end of his career. And, finally, there is no recollection that Alex the Great drew the strength for that final ninth inning at the Stadium in 1926 from anyone but himself.

But this only goes to show you how misleading the records can be since this picture version is presented by the Warner’s as true.  And Ronald Reagan, playing the redoubtable Alex, and Doris Day, playing his wife, couldn’t have possibly put so much yearning and burning into their roles if this weren’t so.

As for Frank Lovejoy as Rogers Hornsby, James Millican as Bill Killefer and several more, some of them genuine old-timers – well, you don’t think they’d string a line. Most reassuring, however, is the fact that a technical adviser on this film was Mrs. Grover Cleveland Alexander. After all, she should know.”
– Bosley Crowther, June 1952, New York Times read full version. “He (Alexander) had periodic dizziness (not diagnosed in the film as epilepsy) which was believed to be due to too much alcohol consumption by everyone else, including his wife. This movie doesn’t tell it but Alexander had seven of nine very good seasons with the Cubs before 1926, where the screenplay shows that he washed out of the league and couldn’t find a position with any club until old friend Rogers Hornsby, second baseman and player-manager of the Cardinals, added him to their roster and he went on to help them win the World Series beating the New York Yankees. For what it’s worth, Alexander had three more productive years with the St. Louis Cardinals before he returned to the Phillies and then retired.

Note: 17-year old Russ Tamblyn (no longer Rusty, his credited name in a dozen earlier films) appears as one of Alexander’s many siblings two years and two movies before his adult acting career would begin with Seven Brides for Seven Brothers (1954).” – Classic Film Guide